Jared Anderson: I Want To Stay as Active as Possible in real Fights

There will come a day when boxers can once again enjoy the experience of fighting in front of fans.

Jared Anderson is among those awaiting a return to that setting, but not to the point of allowing his career to go stagnant in the meantime.

The unbeaten heavyweight prospect makes his way back to “The Bubble” in Las Vegas, where he will appear as part of an ESPN telecast live from MGM Grand Conference Center. Anderson will take on Hector Perez (7-2, 3KOs) in supporting capacity to another heavyweight bout between former title challenger Carlos Takam (38-5-1, 28KOs) and Jerry Forrest (26-3, 20KOs).

“I love it,” Anderson (4-0, 4KOs) told BoxingScene.com of the quick turnaround. “For the Top Rank team to have that much trust me in makes me really confident in my ability.” 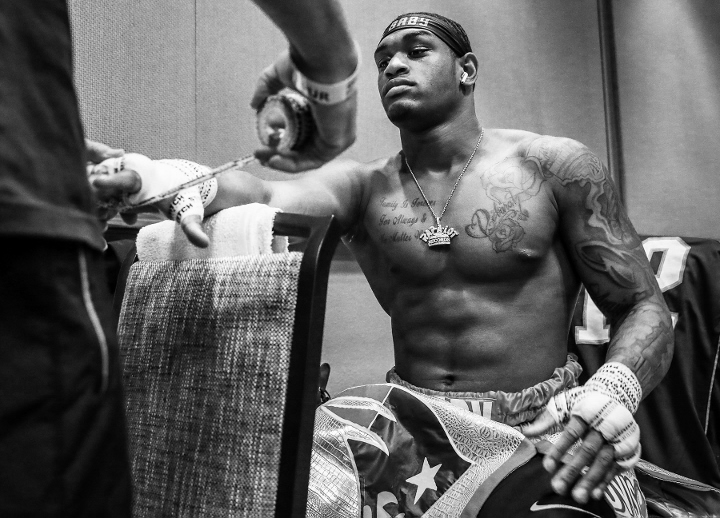 Anderson—a 20-year old rising knockout artist from Toledo, Ohio—fought on the first event in Top Rank’s current closed-doors series in Las Vegas. The occasion marked the longest bout of his young career, stopping Johnnie Langston in three rounds after having fought a combined 4:54 worth of ring time in his three previous bouts.

One month later, Anderson is ready to do it all over again—this time fully prepared for what to expect in terms of a still relatively new fight environment. The initial shock of being tested for coronavirus upon arrival and throughout fight week along with remaining in isolation is now merely part of the job.

“It was different. I know how to work with a lot of stuff, but it was definitely different,” Anderson admits. “I heard my coaches better. That was a plus. In a way, it was kind of peaceful. Being out there on the site and away from everybody, there weren’t any distractions. It was peaceful. Being in the room just talking to my trainer, it was nice.

“It wasn’t a bad experience, I can say that.”

His opponent can apparently say the same. Perez is also a repeat customer on the Bubble circuit, just three weeks removed from a six-round win over Juan Torres on June 16. The 29-year old DominiRican—now based out of Tamarac, Florida—moved up from cruiserweight for his previous appearance and remains at heavyweight to provide Anderson with a second straight opponent who has never previously been stopped.

Such opposition is key to the growth development for a young heavyweight, while also illustrating the confidence in Top Rank matchmakers to continue this route as well as the athlete embracing the challenge.

“I want to stay as active as possible in real fights, and I love that Top Rank believes in me,” notes Anderson. “It makes me want to go even harder to be the best that I can be.”

He's gonna be a problem. Big, strong, can boxing, and is fluid. He's got to stay active as he says and drop the "Big Baby" name. It's already taken & been tainted.

Just as long as he drops the "Big Baby" nickname!!!