James Tennyson has been given a quick-fire return date after what was arguably the best performance of his career.

The Belfast super-featherweight stepped up to lightweight last weekend to take on Atif Shafiq in London.

Tennyson stopped Haroon Headley-trained Shafiq at the O2 Arena, exclusively live on Sky Sports Box Office in the UK, ESPN+ Stateside and DAZN globally, when the pair clashed for the vacant WBA International title at 135 pounds on the undercard of Vasiliy Lomachenko’s vacant WBC lightweight world title win over Olympic gold medallist Luke Campbell in which he also retained the WBA, WBO and Ring Magazine belts. 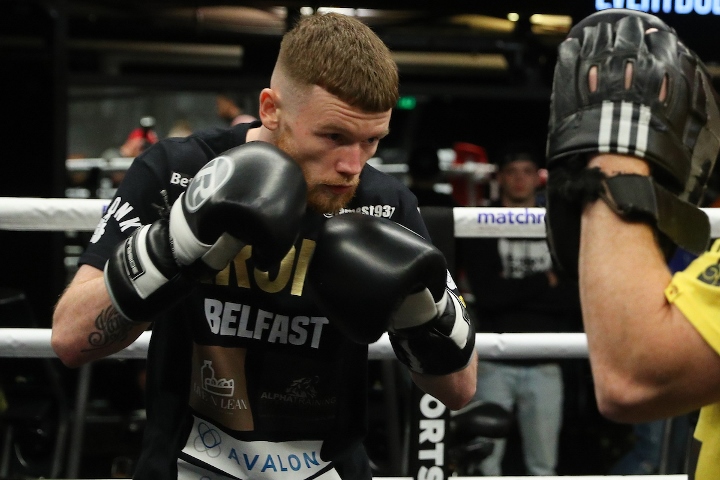 And now, after finishing Shafiq inside two rounds in the capital, Mark Dunlop-managed ‘Tenny’ has been rewarded with another lucrative pay-per-view opportunity.

The former European super-featherweight champion and IBF world title challenger will return to the O2 Arena on October 26, again exclusively live in the UK on Sky Sports Box Office, and is expected to defend his newly-acquired title when he faces Welshman Craig Evans in a showdown that will double up as an eliminator for Joe Cordina’s British title.

Evans has a record of 20-2-2 with three quick and was last in action back in June at the Vale Sports Arena in Cardiff when he won an unanimous decision against Stephen Ormond to retain the WBO European title.

Lawrence Okolie steps up in class from British level to take on Yves Ngabu in a challenge for the European cruiserweight title and Conor Benn will also feature alongside IBO female world super-featherweight champion Terri Harper.

New additions to the card, including the expected spot for Watford super-bantamweight Shannon Courtenay, will be revealed in due course.

I like this fight, Tennyson is pretty good, just has an Achilles heel in that he's weak as hell to the body. You either fold him up on body shots or he destroys you, pretty much, should be a competitive…