BoxingScene understands that a deal has been struck for a December 8 meeting between James DeGale (25-2-1, 15 KOs) and Chris Eubank Jr (27-2, 21 early).  The fight is rumoured to be the latest bout to be shown on ITV’s PPV channel here in the UK with the venue to be confirmed, although it is likely to land in London.

DeGale, 32, had a torrid end to last year after losing his World IBF Super middleweight title to Caleb Traux by a Majority Decision at London’s Copper Box Arena in December, his first fight of a new deal with former promoter Frank Warren, who is now his former, former promoter.  He won the belt via the same result at the Hard Rock Café, Las Vegas in April after a gruelling, bitty fight in which he was cut in the third and lost a point for use of the shoulder in round 10.

The former Olympic gold medalist’s only other action of 2018 came in September, a third-round KO win over the overmatched Fidel Monterrosa Munoz at the Citizens Business Bank Arena in Ontario.  "Chunky" has failed to impress in recent years, but he will hope that the come forward style of Eubank gives him the perfect platform to show some of the skills that took him to British, European and then world honours. 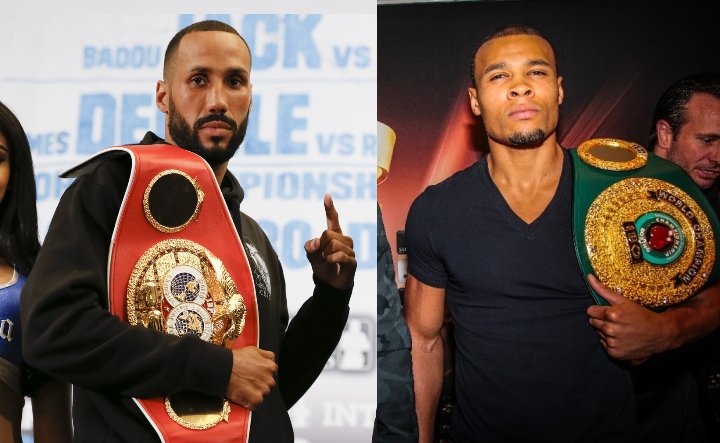 Eubank will be equally keen to impress after turning in a woeful display when meeting George Groves for the WBA’s World title belt in the semi-final of the WBSS at the Manchester Arena back in February.

The 29-year-old former British middleweight titlist was soundly and roundly out-boxed by Groves, who even managed to outmaneuver and outfight him in the last round despite picking up a dislocated shoulder early in the stanza.

Eubank’s only other defeat came against former WBO middleweight holder Billy Joe Saunders for the British, Commonwealth and EBU belts in November 2014.  He returned to winning ways with a routine win over JJ McDonagh (W RTD 3) in Jeddah last month on the undercard of Groves’s seventh-round KO defeat to Callum Smith in the WBSS 168lb final.

[QUOTE=EnglishOxide;19186298]Hopefully no more than £10. I want to watch it as I'm a huge Eubank fan but anymore than £10 with no title on the line is a piss take. I might stream it instead actually. I'd pick Eubank all…

I'd be concerned for Degale's health at this point. He is clearly suffering the effects of some heavy wars. I honestly feel there was a time there where he was the very best 168er, but I fear for him now…

I'd like to see Eubank back at 160. Eubank v Charlo/Jacobs/Andrade would be good.

Degale does sit on the ropes far too much IMO but... If he is 100% fit he is at least 1 level above Eubank Jnr. I still believe Degale has one more great performance left and his clear hatred of…