Jamel Herring: All Of A Sudden Everyone At 130 Remembers My Name

Jamel Herring is suddenly the most wanted man in the 130-pound division.

The 34-year old southpaw is coming up on his one-year anniversary as the World Boxing Organization (WBO) junior lightweight titlist, having spent much of his reign calling out the division’s best only to hear nothing but crickets in return.

In recent weeks, however, Herring has seen a number of contenders glance his way as boxers are scrambling to make their way back to the ring amidst the current coronavirus disease (COVID-19) pandemic.

“Everyone’s out to get me all of a sudden,” Herring (21-2, 10KOs) quipped to BoxingScene.com. “All this time, I’m calling out fighters and Carl Frampton was the only one who stepped up. Now all of a sudden, everyone [at 130-pounds] remembers my name.” 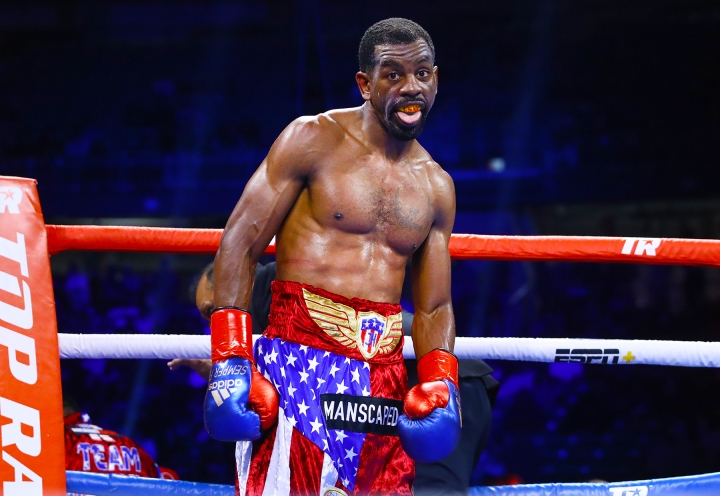 Herring has become an attractive option simply by being available for a planned summer boxing series by promoter Top Rank, who is aiming to stage no fewer than two shows per week beginning June 9. The plans are contingent upon gaining approval from the Nevada State Athletic Commission (NSAC) at the commission’s monthly agenda hearing scheduled for May 27, as the shows will take place in Las Vegas.

The decorated U.S. Marine and 2012 U.S. Olympic Boxing team captain from the Coram section of Long Island, New York is due to headline a July 2 card. His bout will serve as the first major title fight of the series, as well as the first title fight to take place anywhere in the United States since Roman ‘Chocolatito’ Gonzalez’s one-sided stoppage win over Kal Yafai to reclaim a 115-pound strap on February 29 in Frisco, Texas.

A trio of Top Rank fighters—Andy Vences, Albert Bell and Abraham Nova—have plead their case to land the assignment. Of the three, only Nova is ranked in the WBO top 15, although any plans for such a showdown never went beyond casual discussion.

Bell has repeatedly taken to social media insisting he will land the assignment, while Vences went the more diplomatic route as previously reported by BoxingScene.com. With neither of the two currently ranked, their cries could ultimately fall on deaf ears.

As such, the hunt remains on for an opponent for Herring, who looks to make the second defense of the title he claimed in a clear-cut decision win over Japan’s Masayuki Ito last Memorial Day weekend in Kissimmee, Florida. His first defense resulted in a 12-round win over unbeaten Lamont Roach Jr. last November, on the Saturday prior to Veteran’s Day.

His next fight will now come right before Independence Day, keeping well within his title reign theme of honoring the U.S.’ most patriotic holidays. The hope for either of his two title defenses was to land a unification bout, as he was of the belief that such a clash with long-reigning titlist Miguel Berchelt was to follow his aforementioned win over Ito. Mexico’s Berchelt, who was ringside for the occasion, was initially on board before walking back his comments and heading entirely in another direction.

Herring has since set his sights on Frampton (27-2, 15KOs), a former two-division titlist who was prepared to welcome the American southpaw to his hometown of Belfast, Northern Ireland for a June 13 clash. Those plans were scuttled given the ongoing global health crisis, with hopes of revisiting later this year.

That fight very much remains a priority, though for now the focus is on fighting a suitable—and ranked—opponent for his targeted July fight date.

“I’m just ready to get back in the ring,” notes Herring, who returned to training camp earlier this month at head trainer Brian ‘Bomac’ McIntyre’s facility in Omaha, Nebraska. “It’s good to know that there are all these options for me all of a sudden.”

One potential candidate for July 2 is Puerto Rico’s Jonathan Oquendo, who is ranked by the WBO. He is also of similar stature to that of Frampton, which would make for a smooth transition going from one title defense to the next should Oquendo land the assignment.

The division will be put on notice if he beats Frampton.

It might be bcuz you are the weakest champ out there, surely not the most avoided

That's just how it goes Herring. Couple years ago Spence was calling himself the most avoided man at 147 now he is Keith Thurman Jr. I remember Keith crying about Paulie and Guerrero not wanting to fight him now he…