Jaime Munguia has every intention of maintaining his status as a junior middleweight titlist by the time he next enters the ring.

Whether or not the title will be at stake for that very assignment isn’t quite as clear.

The unbeaten 23-year old is preparing for his next fight, which BoxingScene.com has confirmed with team members will take place January 11 in San Antonio, Texas, as first reported by ESPN Deportes’ Salvador ‘Chava’ Rodriguez. An opponent has yet to be named for the assignment, nor has it been decided if he will attempt the sixth defense of his 154-pound title or if the date will be used to test the middleweight waters. 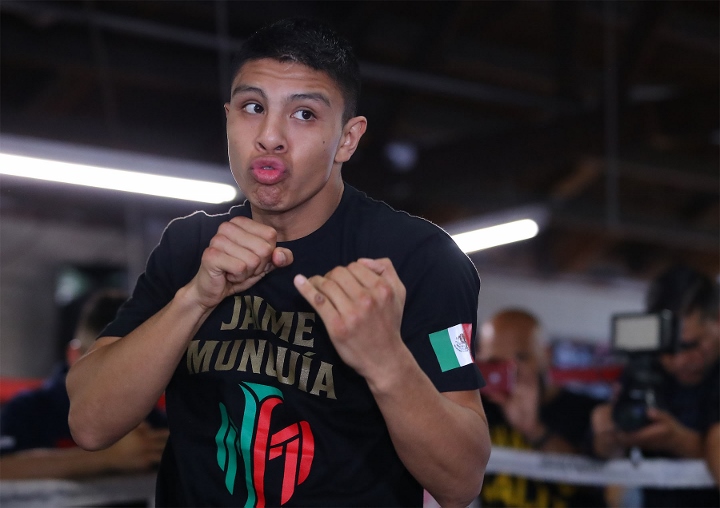 Tijuana, Mexico’s Munguia (34-0, 27KOs) has toyed with the idea of abandoning his 154-pound title reign, in line with increasing concerns that he is bound to outgrow the division. For now, the Tijuana, Mexico native plans to hold onto the title, a decision which impacts the status of a Nov. 30 bout between Carlos Adames (18-0, 14KOs) and Patrick Teixeira (30-1, 22KOs), with their bout serving as a final eliminator to determine his mandatory challenger.

A decision to relinquish his strap—as was rumored to be the case earlier this summer prior to his most recent bout—would upgrade that very matchup to a vacant title fight. Not only did he opt to hold onto the title, but also put it on the line in spite of previous rumors that he was going to fight at a catchweight.

Munguia instead made the fifth defense of his title reign with a 4th round knockout of Patrick Allotey this past September in Carson, California. The bout streamed live on DAZN, as will his Jan. 11 bout. His forthcoming bout will mark his ninth ring appearance in a span of less than two years, including his seventh in just 20 months dating back to his May 2018 4th round knockout win over Sadam Ali to win the junior middleweight title.

It is November. Kind of late in the process to be still deciding if you are a 160 ponder or not. Strange times with this guy. I like him, but it is a very strange story. Pick a division, get…

They are in the process in looking into graves or a washed up 147 pounder for his next fight.

Not sure what to make of this young man.

He was fighting Donald Curry, yup I said it! When are they going to fight a Live dog? I wish I could get rich fighting nobodies