Jaime Munguia: I'm Thrilled To Be At Middleweight

A mere 50 weeks after his Texas-sized DAZN debut, Jaime Munguia couldn't be more thrilled with the circumstances in which he returns to the Lone Star State.

The unbeaten junior middleweight titlist headlines a Jan. 11 card live on DAZN from The Alamodome in San Antonio, Texas, where he will test the middleweight waters versus veteran contender Gary 'Spike' O'Sullivan. The bout comes less than a year after his first fight on the over-the-top (OTT) media service, which served as his first career fight in Texas as the 23-year old Tijuana, Mexico native outpointed Takeshi Inoue last January in Houston.

"I'm very happy to be fighting in San Antonio, Texas," Munguia (34-0, 27KOs) said of his second career fight in Texas and sixth overall in the United States, all which will come in a 25-month span by fight night. "We are preparing very hard to make sure we deliver a great fight to the fans."

The bout will mark Munguia's second with Hall of Fame former four-division titlist Erik Morales, who took over the training reins prior to his last bout—a 4th round knockout of Patrick Allotey this past September in Carson, California. The win marked Munguia's fifth defense of his 154-pound title just 16 months after violently snatching the crown from Sadam Ali last May. 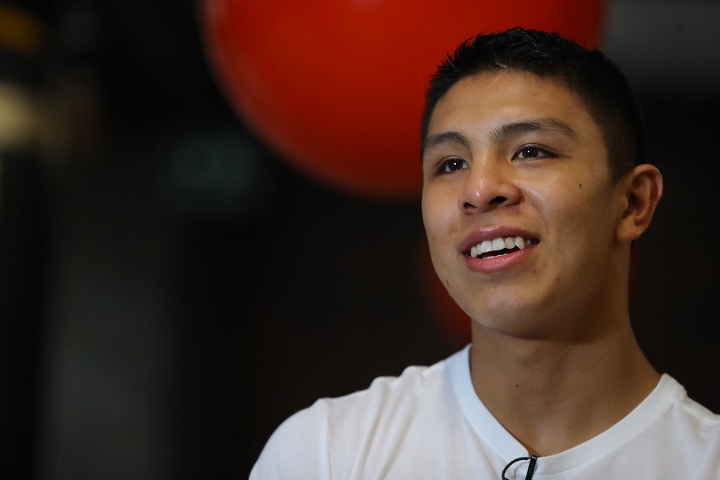 For now, the belt will remain in his possession, although the 6'0" manchild is enjoying the opportunity to fight with six extra pounds added to his frame. It is undecided whether the move up the scale will be permanent or merely on a case-by-case basis, but there is plenty of upside to eventually abandoning his junior middleweight title reign.

"I'm thrilled to be fighting at middleweight," stated Munguia. "Everyone says this is where all of the best fights take place."

As much was spelled out by Golden Boy Promotions, who along with Zanfer Promotions guide Munguia's career. Golden Boy also co-promotes Ireland's O'Sullivan (30-3, 21KOs), and is the sole promoter for the sport's most lucrative attraction, Saul 'Canelo' Alvarez whose career now spans three weight divisions, including middleweight where he remains the World (lineal) champion.

All three options play into why Munguia is willing to give middleweight a test run. Of course, only one fight is on his mind at present moment.

"I have a very tough fight in front of me," acknowledges Munguia of O'Sullivan, who has won two straight following a Sept. 2018 knockout loss to former middleweight titlist David Lemieux. "If I want those big fights, I have to prove it against this very tough opponent and advance in the rankings."

[QUOTE=ceylon mooney;20215302]oh yea. dont think he has a good chance ahainst a top 5 MW, but munguia-osullivan aint bad at all. im a lil surprised he sint picked a dpfger touch for his first go at 160.[/QUOTE] He’ll get it…

The O'Sullivan fight is a good entry test at MW. Spike shouldn't be able to outbox him or outpace him like Hogan did at times. Spike is tough and will try to bring it but he doesn't possess concussive power…

I'll be thrilled when he rematches Hogan.

[QUOTE=NC Uppercut;20215004]I think you should bypass Ol’ Spike and go straight for Lions Only! Glad to see Yo big a$$ is finally finished preying on the little guys. Betcha he loses within 2-3 fights at middle[/QUOTE] oh yea. dont think…

I think you should bypass Ol’ Spike and go straight for Lions Only! Glad to see Yo big a$$ is finally finished preying on the little guys. Betcha he loses within 2-3 fights at middle