Jaime Munguia: I Want All The Best - Canelo, Golovkin, Charlo!

SAN ANTONIO—If there was any upside to having to train through the holidays, it’s that Jaime Munguia had an additional six pounds to work with for his next fight.

The former junior middleweight titlist comfortably fit into a 160-pound frame (159.4, officially) for his first fight at middleweight, am 11th round stoppage of veteran fringe contender Gary ‘Spike’ O’Sullivan. The win—which aired live on DAZN from The Alamodome in San Antonio, Texas—was preceded by pockets of entertaining two-way action, but with Ireland’s O’Sullivan simply wearing down while the unbeaten former champ looked like he could go another 12 rounds. 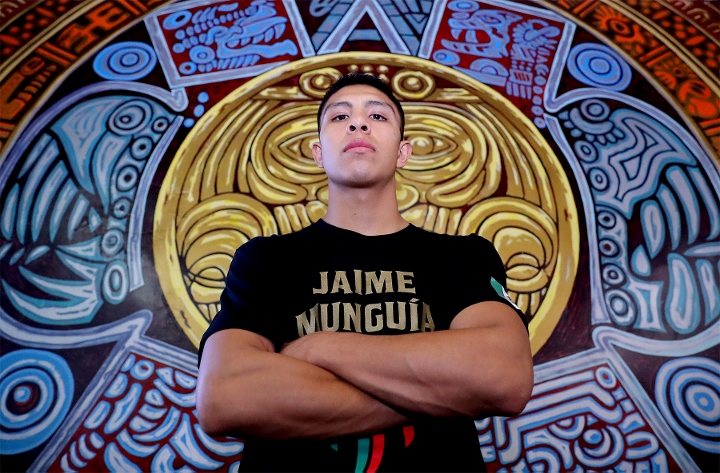 Munguia managed to boil his 6’0” frame down into a 154-pound uniform long enough to scratch out five successful title defenses, with six total title fights coming in a 16-month clip. Ring activity was promised no matter where he fought, leaving the 23-year old Tijuana, Mexico native to vacate the belt in favor of a lofty ranking at middleweight before stepping foot in the ring.

Fortunately, he justified the positioning in Saturday’s performance, having his way with O’Sullivan (30-4, 21KOs) particularly in the later rounds to enter the mix as a middleweight player.

Naturally, he’s already gunning for the biggest names in the division.

Interestingly, all seem to have tentative plans for their own next ring adventures, which could lead to a stay busy fight for Munguia if not a direct shot at the winner of Andrade’s voluntary title defense versus Ireland’s Luke Keeler.

Munguia is a likeable, action fighter. However, he’s not ready for Charlo, GGG or Canelo. He’s like the second coming of Perro Angulo taking too many punches just to land his. He’s got a whole lot of improving to make.

He's an action fighter without knockout power. He won't be a viable fighter in 4 years.

[QUOTE=factsarenice;20320398]Spend $70 on a guaranteed outcome and yet $10 is too much for you? Either math isn't your strong suit or you just streamed it and talk a good game while wearing a fake Rolex. As for your drivel like…

Charlo is too scared to fight on DAZN, no matter how much of a career high payday you give him. Not unless he can extort Canelo like everyone else is trying to.

Goldenboy isn’t making any of those fights accept Canelo. And it’s only because they are trying to generate new easy opponents for Alvarez. Yes they will feed Mungia to Canelo for the easy KO. But there will be no fights…