Not so much, though, that Jacobs seriously considered volunteering to replace Canelo Alvarez once the suspended superstar pulled out of his May 5 rematch against Golovkin two weeks ago. Jacobs already was deep into training camp for his April 28 fight against Maciej Sulecki when Alvarez withdrew, thus he didn’t think it was a realistic option.

“Well, it was a thought, but it wasn’t nothing that was very significant,” Jacobs said during a conference call Tuesday. “I mean, I had obviously a contract [to fight] Sulecki and I wanna make sure he has his opportunity and give him his just due as well, with all due respect. And he’s a tough opponent, too, so I know it’s gonna be a great fight. And that’s what I’m looking forward to. So even though I have big dreams and big hopes of fighting for the championship, I already had something lined in place.” 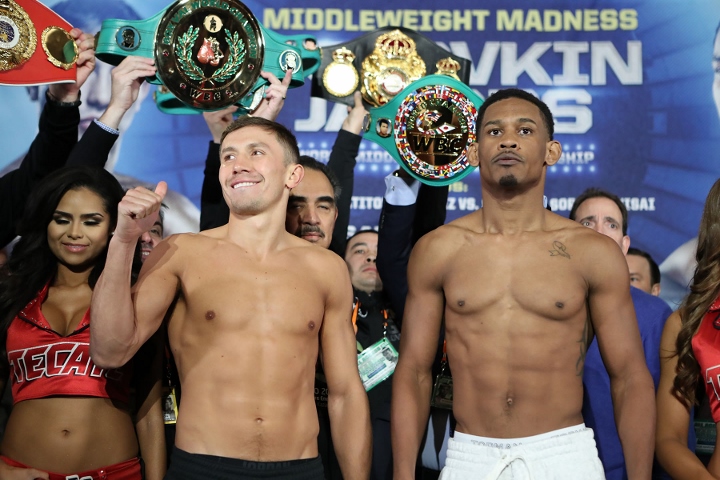 Eddie Hearn, Jacobs’ promoter, didn’t give any legitimate thought to Jacobs replacing Alvarez on short notice, either. Hearn wants Jacobs to get a chance to avenge his close loss to Golovkin, but he also wants his fighter to have the appropriate amount of time to prepare for that challenging assignment.

“I’m not really into taking fights at short notice or without the right preparation for those kind of fights when you have the opportunities in front of you that Danny Jacobs has,” Hearn said. “I think if he didn’t have a TV deal, if he wasn’t able to box basically whenever he wanted, if he wasn’t able to pick and choose his dates or fight at great venues, yeah, then maybe we would’ve been in position to say, ‘Oh, let’s try and get that [fight against Golovkin] instead.’ But the future’s very clear right now and one thing that we said to Danny when he joined the team was that he’s gonna know exactly when he’s boxing, he’s gonna be keeping nice and active, and we don’t wanna disrupt that.

“So we’re gonna do our own thing. This is a real fight against Sulecki. Of course we’re looking at Canelo and we’re looking at Golovkin. But we’re not overlooking the fight on April 28th. And I’m really comfortable that after a great performance from Danny Jacobs on April 28th, then you talk about the superstars of the division, I don’t see why Danny Jacobs is not a superstar in the division. I believe that he already is. And with the mess with Canelo and Golovkin, I’ll make it a three-horse race right now between [Billy Joe] Saunders, Golovkin and Danny Jacobs.”

Kazakhstan’s Golovkin (37-0-1, 33 KOs) edged Brooklyn’s Jacobs (33-2, 29 KOs) in their highly competitive middleweight championship match 13 months ago at Madison Square Garden. Jacobs’ applauded performance in that 12-round fight helped him land a multi-fight agreement to have his fights broadcast by HBO exclusively.

HBO will air Jacobs’ bout with Poland’s Sulecki (26-0, 10 KOs) from Brooklyn’s Barclays Center a week from Saturday night. Hearn has said the winner between Jacobs and Sulecki will become the WBA’s mandatory challenger for Golovkin’s WBA middleweight title.

[QUOTE=Mammoth;18683287]He did better than Clenelo against GGG[/QUOTE] I agree. I'd pick Jacobs over Canelo based on their fights with Golovkin.

[QUOTE=Butch.McRae;18682030]All of these guys at 160 are very comical imo. Everybody at the top are all businessmen lol weirdly all of them are in preparation for a fight right now and in theory could've made a big clash happen. Any…

[QUOTE=Mammoth;18683287]He did better than Clenelo against GGG[/QUOTE] They both did good. I guess in some aspects he did. He definitely knew how to use his reach against Triple g. I actually lost $50 on the fight cause I was going…

[QUOTE=Boxfan83;18683251]Jacobs did well as far as winning some rds and or landing punches here and there but he got beat up that fight. I would have definitely rather been GGG after that fight.[/QUOTE] Yes it was a good close fight…

[QUOTE=BigStomps;18681813]So in other words Danny Jacobs is just selling wolf tickets but doesn't really want the triple g rematch... I'm sure he could of worked out a deal to cancel the fight with Sulecki in order to fight Triple g…