It’s the point of the process where others began wondering what they’d signed up for.

But not Daniel Jacobs.

Instead, the 30-year-old is oozing cool as the days tick down to his date with multi-belted middleweight champion Gennady Golovkin, set for March 18 at Madison Square Garden.

Jacobs will carry the WBA’s dubious “regular” title into the ring, but his aim is to ditch the meaningless trinket and exit midtown Manhattan with the Kazakh’s full-fledged IBF, IBO, WBA and WBC baubles.

And if the Brooklyn native’s words are genuine, he truly believes he’s the man for the job.

“I do believe that I have the best assets,” Jacobs said. “The only thing I believe he has over me might be power. But if he has A-plus power and I have a B-plus, I still can hurt you. That’s still not that bad. I do think that, overall, offensively and defensively, I am the better fighter. I just have to make sure everything is in tune and I stay sharp come fight night.”

It’ll take that, and then some, to convince the odds-makers he’s ready.

Golovkin is a significant favorite according to the numbers guys at Bovada, where it’ll take an $800 wager on the champion to return $100 if he wins. Meanwhile, a $100 flyer on Jacobs – who’s stopped 12 straight opponents since a fifth-round loss to Dmitry Pirog in 2010 – will yield a $500 windfall.

The underdog concedes the challenge of “Triple-G” represents a step up from the Caleb Truax, Sergio Mora (twice) and Peter Quillin track he’s been on since the start of 2015, but suggests a healthy fear of the task at hand presses him to prepare more thoroughly than for any previous test.

“This is definitely the pinnacle. This is the toughest challenge that I’ve ever had in my career,” he said. “I’m scared to death. Who wouldn’t be? This is the biggest challenge that you can have, and me saying I’m scared isn’t a bad thing because being a human and being an athlete you have to have that fear to make you train harder or put yourself in positions to where you can overcome. That fear can get you through a lot.

“I’m not fearful of Triple-G the person or the fighter, but just what they made him out to be. I’m training according to that and what I see. So, yeah, I’m training like I’m the most terrified guy in the world and that’s going to make me the most hungry. My reflexes are going to be on point. They say a scared fighter sometimes can be the most dangerous fighter out there. I’m looking forward to going in there and being scary.” 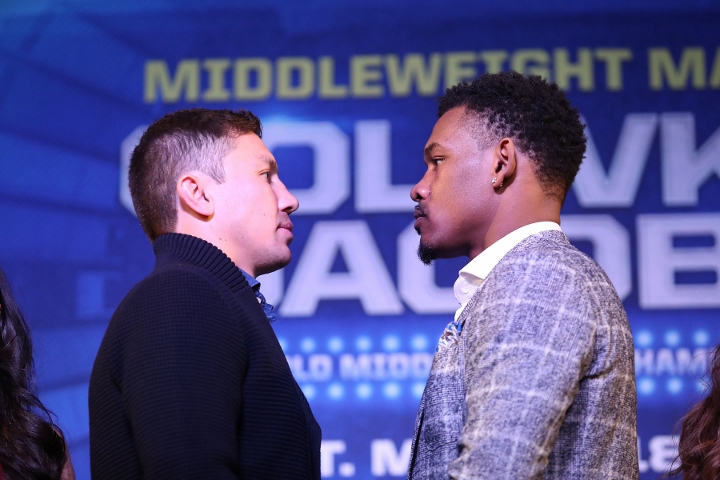 Jacobs took a brief respite from training to sit down and discuss preparation for Golovkin, his assessment of the hype surrounding the unbeaten champion and what success will look like come the middle of next month.

BoxingScene.com: You’re five weeks out from the fight and in the heavy lifting part of training camp. What do these days look like? What’s the grind and mindset like?

Daniel Jacobs: The mindset first and foremost is growing daily. I’m getting more and more confident as the days go on. Having the team that I have. Having people motivate and inspire me to be great. Pushing me through tough times. That’s important. I definitely think it’ll override into the fight. When you train and you go through all the ups and the downs and you’re pushing yourself in the most gruesome parts of training, sometimes the fight can be that much easier. As far as the physical, yeah, we’re definitely in the prime, in the most heavy part of training. Just enough time for us to put in some really hard work before we start dialing it down and focus on other certain little things. Right now, we’re full-fledged into hardcore training.

BoxingScene.com: Do you look at a lot of video of opponents, or wait until you’re in the ring with them?

Jacobs: I don’t understand how fighters don’t look at fights, to be honest with you, and study opponents especially if they’re fighting them. That’s bizarre to me. I’m definitely one of those guys who loves to see what my opponent does because I’m one to study bad habits. Though certain fighters will do certain things differently in fights, they can’t refrain from not doing their same old bad habits. We study those bad habits and we work on those things, and we also work on implementing my strengths inside the fight. That’s a recipe for a nice night of boxing.

BoxingScene.com: Others have steered away from him. What is it that made this fight happen for you?

Jacobs: I believe in my abilities. I can’t speak for anybody else, but I believe that I have all that it takes to beat this guy. Also, I fear no person. How do you know what you can be in life if you always quit before you get to the toughest challenge, if you feel like you can’t accomplish that? You’ll never know what you’re made of. We’re human, we’re going to get nervous, we’re going to sometimes go through a lapse mentally. That happens to the greatest of them all but that doesn’t take you away from the challenge. I’m looking forward to the challenge. I’m looking forward to performing under the pressure, performing under those lights, performing in front of that crowd and performing under the most gruesome circumstances. That’s when I’ll really know what I’m made of. I’m looking forward to giving it my all.

BoxingScene.com: As a fighter looking at another fighter, what jumps out about him?

Jacobs: His power. Simply put. This guy has tremendous power. You can’t take that away from him. He’s a very strong guy. And his ability to cut the ring off and apply pressure to people who really don’t know how to have that educated footwork. It mentally drains them and it brings them down to where they drown. But me being a guy who knows how to use my feet, me bring a guy who has speed and has that power to kind of stand my ground. I believe I have all that it takes to slow his main attributes down.  How are you going to deal with the power? How are you going to deal with being hit like that, from a guy who’s the biggest puncher you’ve ever fought? He’s going to have to really kill me inside that ring because I’m mentally wrapped too tight for him to break me. When Alexis Arguello fought Aaron Pryor, Arguello was probably the most skillful guy that Pryor had ever fought. He was technically sound. Some could argue he was stronger. He was longer. He was more educated. But it was the will and desire that Pryor had that even when he got hit with those big shots, he just told himself “This hurt but I’m going to keep going.” You’re going to get hit, but it’s how you deal with those shots. It’s how you deal with being hit. I’m looking forward to overcoming. I’ve gone down before but I’ve gotten up. I’ve gotten hit before but I’ve kept fighting. I have that fighter’s mentality. I’m just waiting for the fight because all the talk will come to an end and I’ll have a chance to speak with my hands and let my skills do the talking.

BoxingScene.com: Some say he’s a great middleweight. Some says he’s overrated. What do you say?

Jacobs: I’m training for him to be every bit that they say he is. But in my personal opinion I don’t believe that he is what they’re touting him out to be. I respect him. I respect his game. I respect all that he’s done. He’s definitely made himself a great name already in the middleweight division. But as a fighter with a fighter’s mentality I could care less about all that stuff. That stuff really doesn’t matter to me because I have a goal and no matter what the obstacles are in front of me, if I feel like I’m 100 percent equipped, which I do, I feel like I’m going to be victorious. It’s going to be a mental game more so than anything.

BoxingScene.com: Is your opinion of him based on opposition not on your level?

Jacobs: I just feel like, yeah, in order for you to be great you have to beat the great. Last time I heard that was the saying. Who has he beaten that was great? If he fought maybe a Cotto or a Canelo, even though those guys are still kind of small, then I would have at least said, “All right, man, maybe.” But the most notable guy on his resume by far is Kell Brook, and Kell Brook was a full-fledged welterweight. Nothing taken away from this guy, but you have to fight guys in your division. You have to fight guys that are great. And even though I have gone through my trials and tribulations to where I’m just now coming at this level where people are starting to notice me, I do believe that I’m great. Everything inside me believes I have what it takes to be the best. This will be his real test in my opinion.

BoxingScene.com: What does the fight look like right away if it’s your night?

Jacobs: This is boxing. Anything can happen. You never know. I went in there with a Peter Quillin and thought I was going to outbox him and I caught him with a nice shot and I finished it right there. That right there lets you know that you can’t predict anything in boxing. I try to stay away from predictions. I just do what I need to do when the time presents itself. If an obstacle comes that I need to overcome I’m going to go to Plan B and Plan C. You’ll know when I’m in my rhythm. You’ll know just the body language and the way I’m working and my confidence. I might grunt at him. I might talk to him. You guys are going to know for sure just when I’m in my zone. It’s going to take respect, too, to get that, and I have the power to do it.