Jacobs Not Worried About 2nd Weighin, Plans To Be 174 in Ring

LAS VEGAS - A lot has been made about IBF middleweight champion Danny Jacobs in the lead up to his May 4th showdown against WBC/WBA champion Canelo Alvarez.

The WBC mandates 30 day, 14 day and 7 day weight checks to help ensure that fights don't lose a dangerous amount of weight during fight as they prepare for their official weighin.

The 6' tall Jacobs is the bigger man and will outweigh the 5'8" Canelo on fight night.  The question is by how much. The sanctioning bodies haven't instituted a second day weighin for the fight but Canelo's promoter Golden Boy implemented a second day weighin where neither fighter can weigh more than 10 pounds more than the 160 pound middleweight limit.  After the weigh in both fighters are free to gain as much weight as they want. 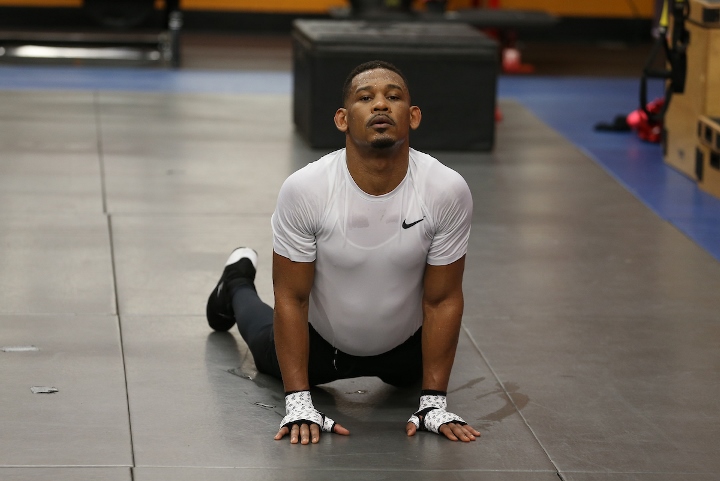 "I am not sure if they look at it as an advantage or what but it was their doing. For me it’s not going to affect me because for my last fight I fought with the same procedures and we were good for the last fight and I look forward to doing the same.”

As for what he will weigh in the ring on Saturday night, Jacobs insists that he doesn't want to rehydrate too much.  He wants to come in at a weight where he feels strong and doesn't lose any of his speed.

“I want to come in what I have been at my whole training camp which is about 174, 175. So I want to gain a good 15 pounds. That to me is where I am at my optimum. Anything over that and I am sluggish. That’s with this whole Triple G thing where I came in at 180, 185 pounds. If you see me perform at that level it’s not the best. I am super sluggish and not fast. Especially the way I was moving on my feet. You are not going to get a type of performance out of a guy that’s overweight. It’s not good for your body to gain so much weight after a weigh in like that and perform. You are not going to be at your best. 12-15 for me is perfect,”  Jacobs told BoxingScene.com.

[QUOTE=Fabes88;19706415]Lmao who Remembers when Jacobs told team ggg he has a special plan for them which turned out to be skipping the second day weigh in lmao[/QUOTE] If he missed it, would Canelo refuse to fight him? It actually sounds…

[QUOTE=Boxing Scene;19706564]Well of course team Cheatnello have to try to get every advantage possible. He couldn't beat GGG on even terms so they had to cheat every way possible. Think about how many advantages they always try to get, catch…

[QUOTE=Jab jab boom;19707639]don't disappear now dumbass after everyone has exposed your bs weight stats. Stand by your mistakes retard.[/QUOTE] [QUOTE=Mexican_Puppet;19706521]Canelo was in 172 against GGG in both fights Stop with your stupidity[/QUOTE] Exposed by Jab jab boom and other posters.…