LAS VEGAS – A smiling Daniel Jacobs jumped at the opportunity to finish the reporter’s question.

The IBF middleweight champion also delivered a message when he was asked, “Do you think you need to knock him out?”

“To get a draw,” Jacobs quipped to a group of reporters following the Manny Pacquiao-Adrien Broner bout Saturday night at MGM Grand Garden Arena. 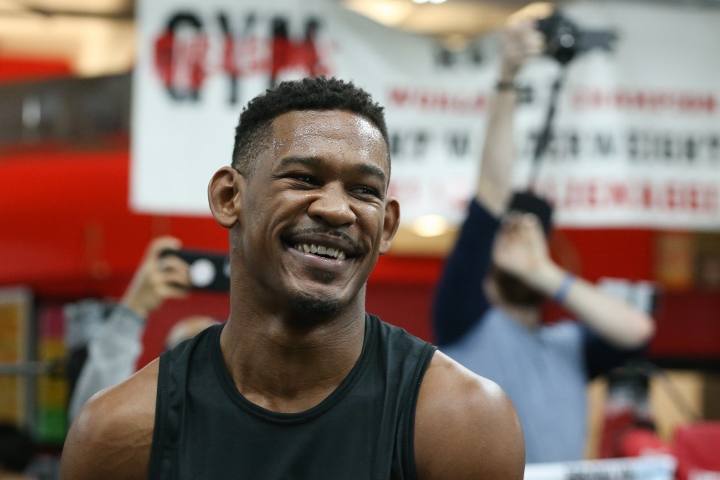 All kidding aside, Jacobs rightfully is concerned about judging as he prepares for a press tour and training camp for his May 4 showdown with Canelo Alvarez. The Mexican superstar’s past two fights in Las Vegas resulted in controversial outcomes – a widely disputed draw with Gennady Golovkin in September 2017 and a debatable majority-decision victory over Golovkin four months ago.

Alvarez also was credited with winning six rounds, 114-114, in his 12-round majority-decision defeat to Floyd Mayweather Jr. Mayweather won by large margins on the other two scorecards (117-111, 116-112) in a September 2013 fight he completely controlled at MGM Grand Garden Arena.

Golden Boy Promotions, which represents Alvarez, has a hold on that Las Vegas venue for May 4. If the Nevada State Athletic Commission approves Golden Boy’s request at its next meeting, scheduled for January 29, that’s where Alvarez-Jacobs will take place.

Judges then would be approved by the NSAC at another monthly meeting in April.

“I’ll definitely be one of the strongest guys he’s fought, and Triple-G’s not as strong as I am,” Jacobs said. “So, I pose a different threat. I’m longer, I’m rangier.”

Jacobs has always expressed confidence regarding a fight against Alvarez, who’s four inches shorter, yet also a powerful puncher. Now that he has secured it, Jacobs is sure he’ll take advantage of this high-profile opportunity.

“I see me winning, regardless,” Jacobs said. “If I put my best foot forward, use all my attributes and adjust when need be, I think I’ll win a decision or a knockout.”