Jacobs: Golovkin's Power Isn't What It Was Made Out to Be

“The way you guys made it seem,” Jacobs said early Sunday morning, “it was just like, ‘Man, this guy is really the boogey man. Can he really knock out guys with one shot?’ ”

But once Golovkin hit him with flush punches early in their middleweight title fight at Madison Square Garden, Jacobs realized he could take Golovkin’s best shots and keep trying to implement his game plan. Golovkin dropped Jacobs early in the fourth round after landing back-to-back right hands, but Jacobs got off the seat of his trunks and traded power punches with Golovkin later in that round. 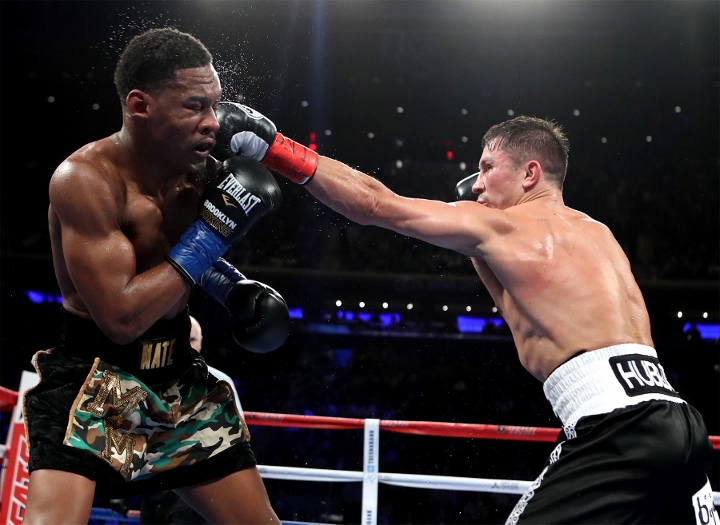 “It wasn’t what everybody made it out to be,” Jacobs said. “I mean, it definitely wasn’t this boogey man, knockout artist that everyone is saying. And even when I got dropped – they said I got pushed a little bit. I mean, I did get hit, but I would have to go back and see it. But I wanted to go trade right there because it really didn’t hurt me. I really didn’t get hurt like I thought if he landed one of those shots, it would be over.”

When their 12-round fight actually was over, Golovkin had done enough to defeat Jacobs by unanimous decision and retain his WBA, WBC and IBO middleweight championships. All three judges – Max DeLuca (114-113), Don Trella (115-112) and Steve Weisfeld (115-112) – scored the fight for Golovkin.

The 30-year-old Jacobs was convinced after the first hard shot Golovkin landed that he would withstand Golovkin’s vaunted power.

“There’s nothing that he did that stopped me from being confident, stopped me from my game plan. If anything, I just switched southpaw and he showed vulnerability there as well. I’m really happy with my performance. I wanna go back and watch the tape to see, because I’m my biggest critic as well. So I’m really fair, where if I lost, I lost. But in my heart I really felt like I really didn’t lose this fight.”

Jacobs also sensed early in their fight that Golovkin would be respectful of his power, something Golovkin hadn’t done against most opponents during that aforementioned knockout streak.

“I won’t say he’s the biggest middleweight, but he’s a fair-sized middleweight,” Jacobs said. “And I knew going into the fight that I would be the bigger man. And we out-landed him in punches, we threw more punches. We just, overall, were successful with the game plan. He was a tough fighter. I knew he was gonna come forward. But he showed respect. He didn’t come forward disrespectfully, like he did [with] every other fighter, the 23 guys he’s knocked out. He showed respect and my boxing ability demanded that respect, and also my power. So I’m happy, I’m proud. All I can do is not cry over [spilled] milk.”

[QUOTE=IRONCHINHAGLER;17538054]They must b knowledgeable BC unlike U and me, they receive a paycheck for their knowledge, research, and opinion!! Similar to the NFL power rankings.. GGG sitd atop the boxing p4p list...[B]some just can't stand it.[/B][/QUOTE] some can hear you…

[QUOTE=aboutfkntime;17538008]right, but what do knowledgeable observers think ?[/QUOTE]They must b knowledgeable BC unlike U and me, they receive a paycheck for their knowledge, research, and opinion!! Similar to the NFL power rankings.. GGG sitd atop the boxing p4p list...some just…

Golovkin: showered Jacob with praise and said he'd be willing to rematch, never complains about Jacobs lying about trying to win the IBF belt and coming in huge to the fight. Jacob: Whines that he won and tries to cut…