Sergiy Derevyanchenko and Daniel Jacobs both made weight Friday for their IBF middleweight title fight.

Jacobs also fought Golovkin for the WBA and WBC middleweight titles he then owned. He skipped that second trip to the scale so that he could add as much weight as he wanted following the New York State Athletic Commission’s weigh-in the morning before their 12-round fight. 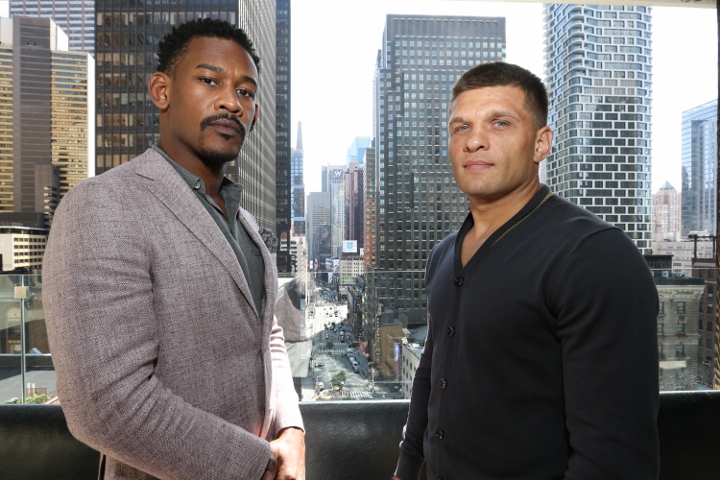 Boxers who compete for IBF titles can add no more than 10 pounds above their division’s limit for the sanctioning organization’s second-day weigh-ins. They then can add as much weight as they see fit before they enter the ring.

“I have to make no adjustments,” Jacobs said regarding Saturday’s second-day weigh-in. “See, with the Triple-G fight, everybody thought that I purposely skipped the IBF [second-day] weigh-in. No, I knew that if I beat Triple-G, I’m the champion in everyone’s eyes, regardless of what belt [I would’ve won]. So I just wanted to make sure I got the proper rest. I [didn’t] have to stress about eating a little bit and then not making weight the next day.

“I mean, to me it’s like I’ve done it before and I can get it done. But with the Triple-G fight, the dynamic was completely different. With this fight, only the IBF belt is on the line, so I have to abide by the rules, which I’m 100-percent comfortable doing. It’s just at that time, I really wanted to get my rest and I figured if I beat Triple-G, I’m the champ in everybody’s eyes.”

Jacobs, 31, and Derevyanchenko, 32, will fight for the unclaimed middleweight title the IBF stripped from Golovkin on June 6.

The top-ranked Derevyanchenko was the mandatory challenger for Golovkin’s title when Golovkin was stripped. The IBF ordered a Derevyanchenko-Jacobs bout once it took its 160-pound championship from Golovkin for failing to adhere to the stipulations of the exception it granted him to make a voluntary defense against Vanes Martirosyan on May 5, rather than making a mandatory defense versus Derevyanchenko.

The four other fights scheduled to appear on HBO also made weight Friday.

Hardy defeated Vincent by majority decision in their highly entertaining 10-rounder in August 2016 at Ford Amphitheater in Brooklyn.

Oh DANNY boy The Lie the lies are flying*** Did you just say you did it to get sleep? Did that sneaky l'il Egor Alfairy Tell you to say that? You should be at LIGHT HEAVY..Your a bully trying to…

BS Jacobs. You knew GGG was a natural middleweight, so by skipping the IBF weight -in, you know you were still in line for the IBO, WBC and WBA titles. That was enough for you to stack on almost 20…

They both look strong & ready to go. This is a good fight for hbo's last fight. If they come back they would have to come back strong.

[QUOTE=Zaryu;19225678]I love how Jacobs says "everyone thinks I skipped the 2nd IBF weigh on purpose for GGG.. " then proceeds to explain how he did in fact skip it on purpose lol![/QUOTE] Lol .. he literally says he didn't do…

Speaking of the Pirog fight I would have given Jacobs a very good chance of beating him in a rematch.