Jacobs: Canelo Was Trickier, But Triple-G Fight Was Probably Tougher

Daniel Jacobs came closer to beating Gennadiy Golovkin than he did winning his fight against Canelo Alvarez.

The former IBF and WBA middleweight champion still considers the Golovkin fight to have been a more challenging assignment than his loss to Mexico’s Alvarez. Jacobs compared those two 12-round, unanimous-decision defeats during an Instagram Live interview with promoter Eddie Hearn on Monday.

“I found Canelo to be a little bit more slippery, trickier, but less active as far as pressure and punch output,” Jacobs told Hearn in response to a question submitted by trainer Ben Davison. “But I felt Triple-G to be more active as far as his pressure. And even though he missed a lot, I do feel like he was a tougher challenge because he imposed himself, or he tried to at least.

“He tried to impose himself and he tried to make it a good go. I think Canelo would just worry about being a counter-puncher and fighting in spots. You know, it could’ve been more of an entertaining fight, me and Canelo. But I just think the Triple-G fight was probably tougher and, to me, probably one of [my] best performances as well.” 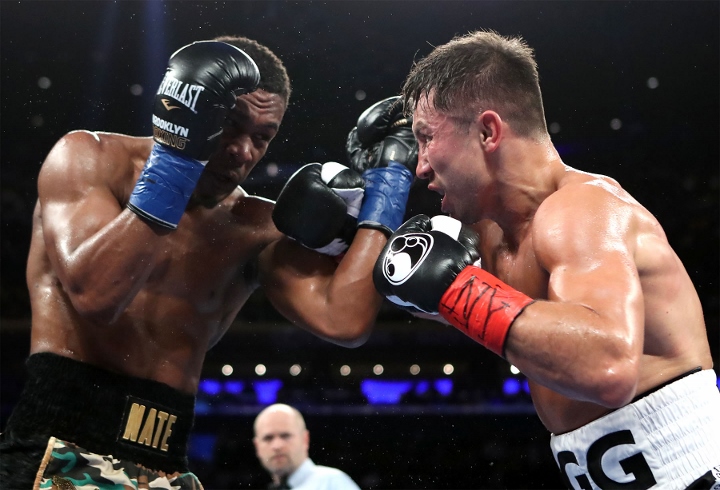 Kazakhstan’s Golovkin (40-1-1, 35 KOs) dropped Jacobs with a right hand in the fourth round of their middleweight title unification fight three years ago at Madison Square Garden in New York. Jacobs got up from that knockdown and made their fight very competitive over the final eight rounds.

Golovkin, then undefeated, beat Jacobs narrowly on all three scorecards. Judges Don Trella (115-112) and Steve Weisfeld (115-112) scored seven rounds apiece for Golovkin, who won by one point on the scorecard of judge Max De Luca (114-113).

Meanwhile, Alvarez and Golovkin appear headed for a third fight later this year. They reportedly have agreed to fight again September 12, though the date and site of that third meeting haven’t been solidified due to the COVID-19 pandemic.

Golovkin and Alvarez have tentatively agreed to take one bout apiece prior to facing each other again.

Golovkin is expected to make a mandatory defense of his IBF middleweight title against Poland’s Kamil Szeremeta (21-0, 5 KOs). Alvarez and England’s Billy Joe Saunders (29-0, 14 KOs) were supposed to meet May 2 at T-Mobile Arena in Las Vegas, but their fight for Saunders’ WBO super middleweight title has been postponed indefinitely.

And quit with the fake betting because I’ve asked you 3, 4, 5 times before to make a bet with me on Facebook Live and STILL you wouldn’t do it! That’s not a lot of confidence. Why? Well cuz you’ve…

Quote me or STFU maricon. Nothing and I mean [B][I][U]NOTHING [/U][/I][/B]you say can be trusted or believed ever. Time after time I’ve busted you lying with your BS scorecards and your non-scoring @s$! Ya te dije maricon, yo soy nacido…

[QUOTE=PoserExposer;20506806]Need a good laugh, here you go. Some pendejo named [U]Shadoww702 [/U] scored the first fight with GGG winning by, and I quote, “2 rounds”. Then he’s goes on countless posts since saying Canelo won now knowing that I have…