The super middleweight championship match seemingly most makeable for Daniel Jacobs would be a shot at Callum’s Smith’s WBA 168-pound title.

Brooklyn’s Jacobs and England’s Smith both are promoted by Eddie Hearn’s Matchroom Boxing. And now that Smith knows he won’t get a lucrative showdown with Canelo Alvarez at any point in the foreseeable future, a well-known opponent Alvarez has beaten is interested in facing the Liverpool native.

If they fight, Jacobs believes he’ll represent a steep leap in class for the unbeaten Smith.

“I love that fight,” Jacobs told Hearn during an Instagram Live interview Monday. “I think [Smith] hasn’t truly been tested yet, especially against a top-notch, world-level fighter. I’m not sure if it’s been hard for him to get fights at that level. But his last fight with Ryder, if I’m not mistaken, was a very close, tricky fight.” 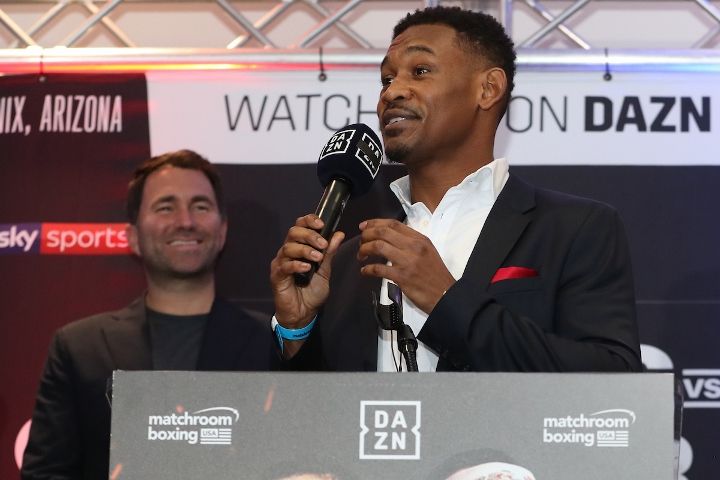 The 29-year-old Smith didn’t have a fight scheduled when the boxing business came to a halt in mid-March due to the COVID-19 pandemic.

Alvarez chose fellow Brit Billy Joe Saunders over Smith as his next opponent. They were tentatively scheduled to meet May 2 at T-Mobile Arena in Las Vegas, but their fight for Saunders’ WBO super middleweight title has been postponed indefinitely due to the coronavirus crisis.

The 33-year-old Jacobs, meanwhile, indicated that he might want one more fight at the super middleweight limit of 168 pounds prior to challenging Smith.

“It’s really so many opportunities out there for me,” Jacobs said, “but the top-notch guys is just, for me, it’s exciting because they’re all good and I know they’re all gonna test me. And now that I’m vouching that I’m gonna be my best [at 168 pounds], and we just seen me, my last outing, me finally have a chance to be comfortable. And, you know, I made the son of a legend say ‘no mas’ in five rounds, you know? So, give me another opportunity to get acclimated and let’s go for the gusto.”

Jacobs (36-3, 30 KOs) beat Julio Cesar Chavez Jr. (51-4-1, 33 KOs, 1 NC) by technical knockout in his most recent appearance. Chavez came in almost five pounds over the super middleweight maximum for that fight, in which he chose not to continue following the fifth round December 20 at Talking Stick Resort Arena in Phoenix.

[QUOTE=HaymonzPlanet;20501643]LMFAO BADOU JACK BEAT GROVES! CALLUM SMITH BEAT UP A WASHED UP GROVES WITH 1 ARM! THEN HE LOST TO JOHN RYDER! CALLUM AND BILLY HAVE NEVER FACED ANY ELITE FIGHTERS IN THEIR MEDIOCRE HYPEJOB CAREERS... THE PROOF IS ON…

[QUOTE=just the facts;20501697]I don’t disagree with you but couldn’t you present your argument without being a total tool about it?[/QUOTE] He can't help but be a total ******* cos he's an insecure waste of space who knows it deep down.

Good fight. I'd definitely watch it. I think Smith beats him but Jacobs is a quality fighter.

[QUOTE=Boxingfanatic75;20503047]The problem is you’re stating Groves is top notch. To that I’d agree. As is Danny. Danny has beaten top notch fighters but not yet elite fighters. Groves is not an elite fighter. Danny’s losses were to elite competition with…

[QUOTE=megh50;20502093]Jacobs failed his three tests against top-notch fighters. He faced them, yes, but came up short. Jacob's level is B to B+. I think Callum is at least that or better...having beat Groves who is also B to B+ and…