Jackson Marinez: I'm Not Afraid Of Rolando Romero's Power At All

Jackson Marinez might not be a big puncher, but he isn’t intimidated by Rolando Romero’s power, either.

The undefeated Dominican contender considers his skill and experience advantages that’ll help him neutralize the heavy-handed Romero in their 12-round fight Saturday night. Santo Domingo’s Marinez (19-0, 7 KOs) and Las Vegas’ Romero (11-0, 11 KOs) will fight for the WBA interim lightweight title in the second of three bouts Showtime will televise from Mohegan Sun Arena in Uncasville, Connecticut.

“He’s a talented kid, with a lot of power,” Marinez said during Showtime’s virtual press conference Wednesday. “But I’m not afraid of his power, not at all.” 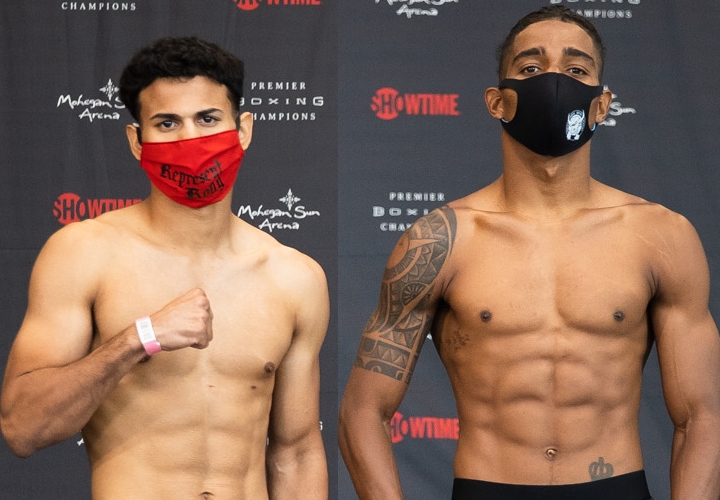 Romero promised to pulverize Marinez in what is considered a step up in competition for both boxers.

“It’s gonna be a very brutal knockout,” Romero told BoxingScene.com recently, “one of the worst knockouts ever seen in this sport.”

“That’s his opinion,” Marinez said. “His opinion is one thing and another thing is what’s gonna happen on Saturday night.”

The 24-year-old Romero, who is promoted by Floyd Mayweather’s company, fought just 35 times as an amateur after taking up boxing at the age of 16. He’ll fight for only the 47th time overall Saturday night against an unbeaten but unproven opponent who has been developed over the past year by respected trainer Robert Garcia.

Marinez has fought almost exclusively in the Dominican Republic and has beaten only one undefeated fighter since he turned pro. In that four-round bout, Marinez beat Brayner Vazquez (then 5-0) by split decision in April 2016.

The stage and the stakes obviously are much bigger in this fight against Romero.

“[Winning would] change my life tremendously,” Marinez said. “This is something I’ve been working my whole life for. The opportunity is here, and I’m ready for it. It’ll definitely change my life for the better Saturday, after I win.”

In the main event, former WBC super middleweight champion David Benavidez (22-0, 19 KOs) will box Colombia’s Alexis Angulo (26-1, 22 KOs) in a 12-rounder. Phoenix’s Benavidez came in 2¾ pounds overweight Friday and was stripped of his title, but Angulo still can win that WBC belt.

[QUOTE=True-Boxing-Fan;20713106]Actually i did. I stated before the fight that Rolly is nothing special, how he is robotic, lacks skills, very telegraphic with his punches and a glorified sparring partner.[/QUOTE] Good call, man...

[QUOTE=Mammoth;20713004]Yeah, Rolly lost but why didn't any of you guys commenting now say that before the fight? And it's not like I've been saying the guy was amazing.[/QUOTE] Actually i did. I stated before the fight that Rolly is nothing…

[QUOTE=True-Boxing-Fan;20712971]Lol lol lol lol lol lol. Rolly sure did. Fuking hype job[/QUOTE] Yeah, Rolly lost but why didn't any of you guys commenting now say that before the fight? And it's not like I've been saying the guy was amazing.

[QUOTE=theface07;20712952]Shows how much you bought into the hype because what, he was a Mayweather promoted boxer with a big mouth who knocked out a bunch of cab drivers? GTFOH. Anyone who thought Rolly was some kind of killer because he…