Jackson: If Jacobs Slugs With Arias, It'll Be a Short Night

The undefeated fighter Jackson trains is largely unknown to boxing fans, but the former two-division champion is fully confident Arias will pull off an upset when he boxes Jacobs in the main event of an HBO “World Championship Boxing” tripleheader (10 p.m. ET). The Milwaukee native is completely capable, according to Jackson, of out-boxing Jacobs or knocking him out at Nassau Veterans Memorial Coliseum in Uniondale, New York.

“If Danny boxes, it’ll be a long night,” Jackson told BoxingScene.com following a press conference Thursday in Manhattan. “If he decides to stand and slug, it’ll be a short night. But either way, we’ll win the fight. People don’t know Luis’ boxing skills. He can box. He’s a very good fighter.” 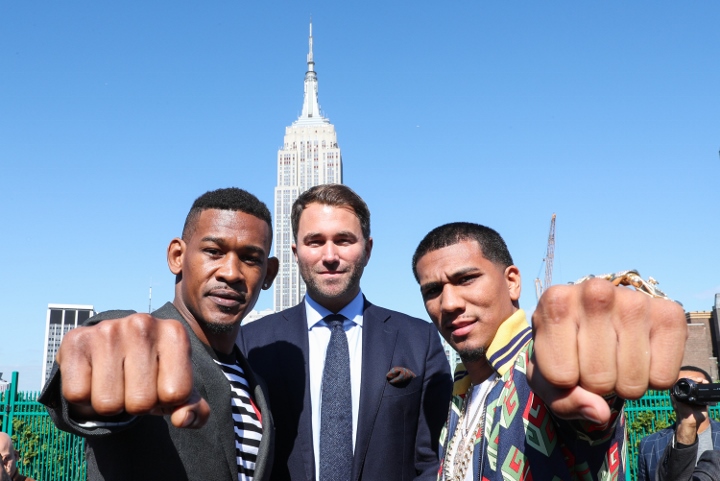 The 27-year-old Arias has knocked out only 50 percent of his opponents (18-0, 9 KOs), but Arias and Jackson consider his knockout ratio deceptive because he was competing at super middleweight for the first three years of his pro career.

“If Luis has to box, it’ll surprise a lot of people,” Jackson said. “If Danny elects to go to war and slug, it’s gonna be easy for us. If we have to work and break him down physically, to the body, it’ll be a longer night. But in the end, he’s still gonna win the fight.”

Brooklyn’s Jacobs (32-2, 29 KOs) will fight for the first time since signing exclusive contracts with British promoter Eddie Hearn’s Matchroom Boxing USA and HBO. In his last fight, the 30-year-old Jacobs gave Gennady Golovkin difficulty during a 12-round middleweight title fight in which he overcame a fourth-round and lost by unanimous decision March 18 at Madison Square Garden.

“Jacobs is a decent fighter,” Jackson said. “I give him respect. He didn’t win his two biggest fights. He fell short. He got knocked out in one [against former WBO champion Dmitry Pirog in July 2010] and he got praised for going the distance with Triple-G. But the bottom line is, you didn’t win the fight. So what, was it a moral victory? If you’d have won the fight, I would give you top billing.

“On the other hand, Luis hasn’t fought a lot of name opponents. But he’s ready to shine. He has watched a lot of his friends from the amateur boxing days surpass him, when he should be where they’re at. So he’s ready. This is his fight. When he was offered the fight, he took it right away. He knows this fight will lead him to bigger and better things. And he wants them. He’s hungry. He wants this victory.”

Arias is decent, nothing amazing though. Unless JDJ brings a case of banana peels and throws some of em out every round and gets away with it, his fighter will have a really good idea of exactly what a canvas…

Arias has good power especially with his left hook but its thudding power, not lights out sharp power like ggg

There will three hits in this fight, jacobs power nuking a bomb on jody arias's brother. Arias hitting the floor and then the ambulance hitting 300kph on route to hospital.

[QUOTE=stealthradon;18199747]The other two guys.. Magomedov was knocked down twice by Segundo Herrera who has a record of 8(3)/31(24)/3 Cunningham has been knocked out 7 times now.[/QUOTE] Yah Arias doesn't stand a chance now.