One of the best Mexican boxers of all time, Jackie Nava, showcased that her quality and talent are two of her greatest virtues, and that her experience helps her solve any problem in the ring.

“Princesa Azteca” (36-4-4, 16 KO's) secured a broad unanimous decision over a willing and brave Estrella “Chacala” Valverde (18-7-2, 3 KO's) in the main event of the third chapter of the Live boxing program “VolvemosconPunch” presented by Zanfer Promotions at the TV Azteca studios at CdMx.

Nava boxed her opponent at a distance, kept her rhythm and she was always the one who imposed conditions. 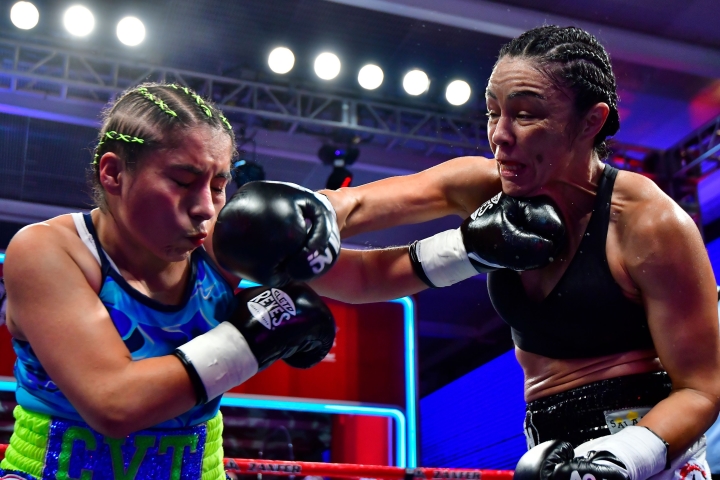 She connected with more punches, and took a well-deserved win that ended an inactivity period of more than a year, and reporting herself ready to face the next challenge.

"I was worried about Estrella's head, she would come in with it. I wanted to throw certain combinations for that reason, but we won very well and now I want Mariana Juárez and Marcela Acuna and retire from boxing as a fighter," expressed Nava, 40-years-old and with nine belts captured in two different divisions.

Mauricio "Bronco" Lara entered the ring determined, and resolved a duel that was expected to be complicated within the first three minutes.

The “Bronco” Lara (19-2-0, 13 KO's) loosened up the body and finished off his opponent with combinations to the head, all executed to perfection, with power shots, and ended up knocking out Alejandro “Piston” Palmero (12-6-1, 6 KO's) in the first round.

Props to Nava and everyone involved! Don't know about 7 judges but maybe 5? Anyway, clear these pros kept in shape. A real treat great boxing!!

This was a good boxing card overall. The main event was a glorious sparring section. :boxing: