Jack: Stevenson's Situation Sad; Hope He Comes Back To Normal

Badou Jack is among many in boxing who’ve been encouraged by Adonis Stevenson’s recovery recently from a brain injury.

Jack, who battled Stevenson to a 12-round draw May 19 in Toronto, spoke Wednesday about how he has coped with what has happened to one of his recent opponents. While Jack realizes Stevenson was well aware of what could happen in this brutal business, Stevenson’s situation still has weighed heavily on him.

“I was very emotional about it, since I’ve been in the ring with him in my last fight,” Jack said as part of a conference call. “And, you know, he took a lot of punishment in that fight. He was stumbling around in the hotel after the fight, and everybody said he really took a beating. It’s sad, you know? But this is what you sign up for.” 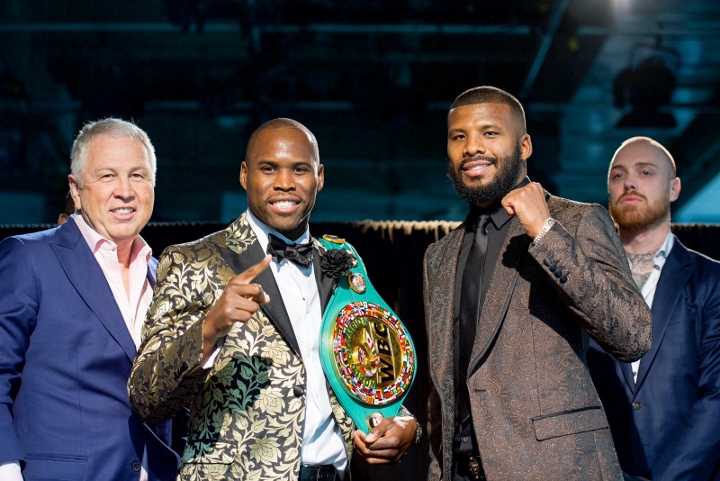 Simone God, Stevenson’s fiancée, announced in a statement released Wednesday to multiple media outlets that Stevenson has begun speaking while recovering at L’Enfant-Jesus Hospital in Quebec City, Canada. She also noted that the former WBC light heavyweight champion from Montreal has been able to use his hands and feet.

Stevenson (29-2-1, 24 KOs) was brought out of a medically induced coma late last month. That was the first strong sign that the 41-year-old boxer can recover from a severe brain injury he suffered during an 11th-round knockout defeat to Ukraine’s Oleksandr Gvozdyk (16-0, 13 KOs) on December 1 at Videotron Centre in Quebec City.

“I’ve been praying for him, you know, since this thing happened and I’m glad he woke up,” Jack said. “And hopefully, he can recover. It’s a business. This is nothing personal. We try to feed our families. Hopefully, he can come back to normal, so he can enjoy his family and his kids and everything. You know, he just had a daughter right before the fight. So, you know, it’s sad. But God willing, he’ll come back to normal.”

Marcus Browne, who’ll box Jack on January 19 in Las Vegas, seconded his opponent’s sentiments on a conference call to promote their fight.

“It’s a sad and unfortunate situation,” Browne said. “But this is, you know, this is what we sign up for when we sign on that dotted line, to get in that ring. That’s the risk that we all take, as fighters. I feel bad for him. Hopefully, you know, he comes out of it with all his faculties, so he can enjoy his family, like Badou said. And most importantly, he’s older. He’s an older fighter. Father Time caught up with him. I heard he was going through a lot of things outside of the ring, so maybe that was part of the reason. But hopefully, he’ll be all right, man.”

Badou Jack is a hard guy to dislike. He's has a great warrior's spirit, tenacious, intelligent fighter and a classy, good-hearted human being.

[QUOTE=Ajvar;19407581]You, Simple, probably were having spikes of hate against every school child who could calculate 2+2 because judging by your responses, calculation was unreachable for many school years for you. And yet I still gave 1% chance to you accepting…

[QUOTE=PunchyPotorff;19407472]%^(*&)*_*@#&^$8[/QUOTE] You, Simple, probably were having spikes of hate against every school child who could calculate 2+2 because judging by your responses, calculation was unreachable for many school years for you. And yet I still gave 1% chance to you…

The always classy Badou Jack. The most underappreciated fighter of this era.

Quote: Originally Posted by PunchyPotorff View Post *Lose... as in loser... and is you for having zero class. You have a beef with Jack? Find another thread. Yes, close fight. But not the time or place to bring it up.…