Jack Cullen vs. Jason Quigley in Play For Whyte-Povetkin Card

Manchester - Jack Cullen returned to winning ways after suffering his second defeat as a prize fighter.

The former English middleweight champion was stopped by Felix Cash at the same venue last November when he challenged for the Commonwealth title.

Cullen was in the fight, despite being down in the first and seventh rounds, before being waved off by referee Howard Foster in the eighth. 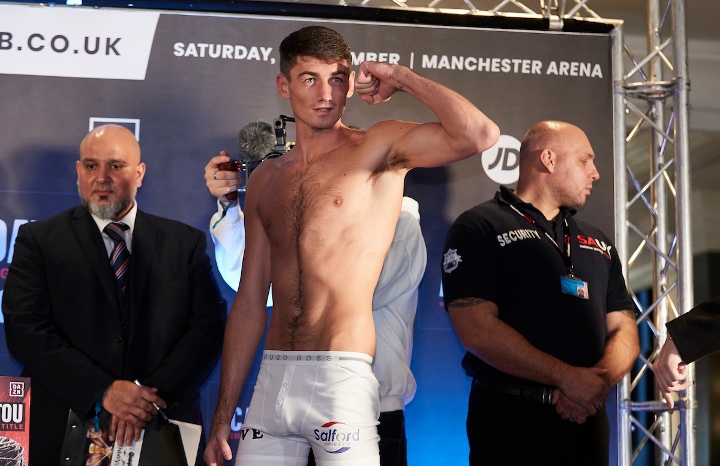 But he managed to get the better of Tomas Andres Reynoso this time around to advance to 18-2 (8 KOs).

The fight had been set for eight rounds, but a good shot in the second round, which floored Reynoso, forced referee John Latham to call a halt to proceedings after just two minutes and 31 seconds of the round.

“I’m happy with my performance,” he said in the aftermath, “and I’m glad to be back to winning ways. The Felix Cash fight was a fight of the year contender but it was no good to me because I didn’t win it.

“The game plan was to use my jab, get some rounds in and then bring in the back hand. The shot I put him over with was the first back hand I threw and the fight was stopped.

“The main thing is that I’m back to winning ways and we go again in nine weeks.

Cullen is set to return on May 2 at the same venue, exclusively live on Sky Sports Box Office and DAZN, as part of the supporting cast to Dillian Whyte’s WBC interim heavyweight title defence against Alexander Povetkin

Former NABF middleweight champion Jason Quigley (18-1, 14 KOs) is scheduled to be in the opposite corner on the pay-per-view card, which will also feature Katie Taylor’s defence of her WBA, IBF, WBO, WBC and Ring Magazine world female lightweight titles against seven-time world champion Amanda Serrano and Callum Johnson facing Igor Mikhalkin in a battle for the vacant European light-heavyweight title.

And Eddie Hearn, who said it is a “delight” to work alongside Cullen, is hoping to firm up the fight sooner rather than later.

“We’re working on that fight,” he said. “It’s one that I think they will both relish and one that is a big step up for Jack. The Felix Cash fight was quality, but the fight between Jack and Quigley will be great. We’ll work on getting that done this weekend for the Whyte vs. Povetkin card.”