Jack Cullen made a big statement as he retained his title.

The English middleweight champion took on John Harding Jr. in the first defence of his crown at the Exhibition Centre in Liverpool, exclusively live on Sky Sports and DAZN.

Cullen, who won the vacant title in Bolton against Jack Sellars back in May, outclassed the Dillian Whyte-managed Londoner and stopped him inside eight rounds. 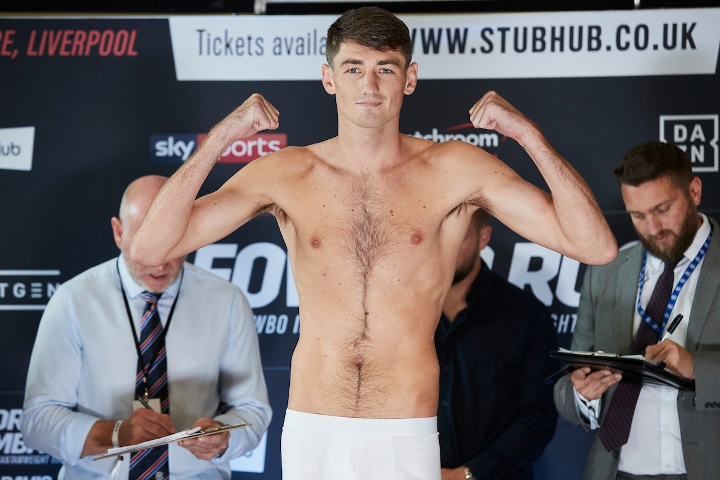 Harding Jr., whose gum shield had to be replaced by referee Bob Williams twice during proceedings, took numerous flurries of shots from ‘Little Lever’s Meat Cleaver’, who used his size and range to his advantage throughout.

After a routine first four rounds in which Cullen dropped very little, it was the beginning of round five when he really began to step on the gas and dropped his challenger.

Cullen was backed up during the beginning of round seven, forced to get on his bike to avoid swinging shots from an increasingly tired Harding Jr., but normal service soon resumed as referee Williams began to once again take a long look at the punishment he was taking.

It wasn’t much later until it was actually stopped –– at two minutes and seven seconds –– after Harding Jr. sunk following a cracking left hook to the body, stumbled and was stopped on the ropes.

“It was an absolute pleasure to fight on a Matchroom show,” Cullen said after the win. “I was gutted not to fight on the July 6 card in Manchester but Eddie stuck me on this and I’m really grateful.

“I felt like I was breaking him down from the first round onwards and I did what I had to do.”

There were chants of “Eddie, sign him up” at the end of the fight from Cullen’s fans, directed at Matchroom head honcho Eddie Hearn, who went on to say that the fight with Felix Cash –– for the Commonwealth middleweight title –– is one that they would definitely like to reschedule.

“I’ll tell you what,” Hearn said, “I don’t know where Little Lever is but I want to go there.

“Who knows what may happen. If these fans keep supporting him, I’m going to buy a house in Little Lever and we definitely want him back, for sure.”

english middleweight champion beats up a novice. felt bad for the brave harding. thanks for the mismatch to promote the "ticket seller" dazn