Izenberg Reveals Fascinating Tidbits in 'Once There Were Giants'

When talking about the 1980 bout between Larry Holmes and Muhammad Ali, Jerry Izenberg is quick to say, “I disgraced myself that night.”

Far from it. As Ali took a frightful beating at the hands of Holmes, Izenberg grew more and more disgusted by what he was seeing, or more accurately, what he wasn’t seeing, which was an intervention by the referee or Ali’s corner. Eventually, he had enough, and he left objectivity to the side.

“I jumped up and yelled at (referee) Richard Green, which I never should have done,” he said. “You can’t be objective all the time, but it was wrong. I said, ‘Richard, stop it, do you want to get him killed?’”

Green didn’t stop the fight, but Ali’s corner did. At least that’s how the accepted story went. Izenberg got the real story.

“It wasn’t the corner that stopped the fight,” he said. “Herbert Muhammad, who was hardly a model citizen and there’s a lot wrong about Herbert and his relationship with Ali, but the fact remains that Herbert said to the gofer, ‘Go down there and tell them that it stops right now or else.’ And then everybody takes credit for it.” 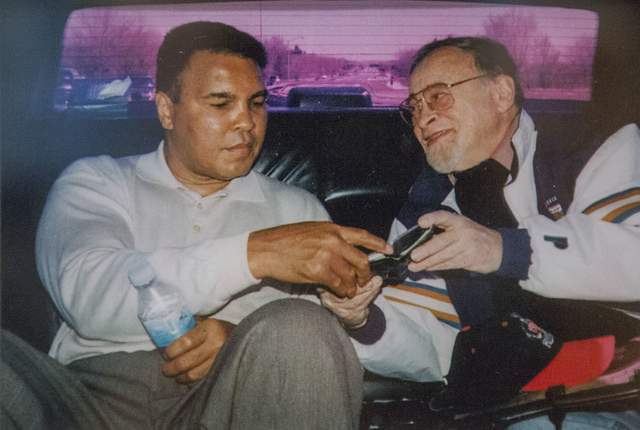 This is the kind of knowledge Izenberg reveals matter-of-factly, fascinating tidbits that only those who were there are privy to. And Izenberg was there for an era he writes about in his latest book, “Once There Were Giants: The Golden Age of Heavyweight Boxing.”

A masterful tome from a master of his craft, the book takes the reader past the headlines and wins and losses and reveals a time in the sport (and history) that will never be seen again.

“There’s a backstory to every champion,” he said. “You notice I skipped immediately over all of the phony championships because I’m not going to acknowledge that. One of the things I think this book will make you remember is that the other divisions have grown, but the heavyweights have not in this country. Stop ten people on the street. Who is the middleweight champion or who is the best fighter in the world? You’ll get an answer. Who is the heavyweight champion? I don’t know, they’ll say. That means there is no heavyweight champion.”

Some might say that’s the opinion of an 86-year-old writer who thinks things were better back in his day. But if that’s the case, it’s only because it’s true. Think about some of the heavyweights featured in Izenberg’s book: Liston, Ali, Frazier, Foreman, Holmes, Tyson, Holyfield. And those fighters didn’t just matter in the boxing world. They mattered everywhere.

And what truly sticks out over the course of reading the book is the access writers like Izenberg used to enjoy.

“(NBA insider) Adrian Wojnarowski said to me one day, ‘I envy you so much because you could talk to these guys,’” the New Jersey native recalled. “You could talk to people. I left the Newark Star-Ledger for three years and went to the Herald-Tribune, and my first assignment there was to travel with the Yankees. We traveled in the east by train, so we’re going to Boston and we’re eating with these guys in the dining car. Some of us are playing cards with these guys; I knew better because they were good. That makes a common ground.”

“The magazine guys in those days, and there were some great ones by the way - WC Heinz was a great writer - but, and it’s a very big but, many of them were the precursors to the crap that we see on the internet now. When (Roger) Maris was chasing (Babe) Ruth, a guy said to him, ‘Well, why didn’t you hit a home run today?’ That’s why I never told my children what I did for a living. I said I was a towel man in a whorehouse because I felt it had more dignity.”

In all seriousness though, when the money started getting better for the athletes and a divide was built between them and the media, access dwindled.

“It’s all money,” Izenberg said. “I wasn’t making what Hank Bauer was making with the Yankees. But it wasn’t so disproportionate. They began to believe they were getting all this money because they were very unique and rare people. They are rare, the ones who play in the majors, no question about it. And I’m for anybody getting all the money they can get. But it gives them a different opinion of themselves. That, and the prep talks they get from the agents. ‘Talk to this guy because he writes for the New York Times; don’t bother with that schlub, he’s over in New Jersey somewhere.’ (Laughs) And it’s a gap. Also, there’s no social intercourse anymore.”

These relationships were based on the trust that the writer was going to tell the subject’s story fairly, warts and all. And Izenberg had the trust of those in his book.

“I personally knew everybody in this book with the exception of (infamous organized crime figure) Owney Madden,” he said. “But Willie Gilzenberg was one of Owney’s right hand guys, so everything about Owney that I had came from him, and he was very close with me. So I really, in essence, knew everything in the book.”

And it’s no surprise that one of only two newspaper writers to have covered every Super Bowl was there for the greatest moments in heavyweight history as well, including The Thrilla in Manila. Reading his accounts of these events is special enough, but listening to him talk about such moments takes things up several notches.

“We’re going into the 13th round,” he said of Ali-Frazier III. “Joe Frazier is standing there with his hands down and his legs shaking like wet spaghetti and Ali is no more than three feet from him, maybe two feet. All he has to do is walk over and push him and the fight is over. Ali could not walk those two feet and at that point, I turned to Jerry Lisker and I said, ‘Jerry, why don’t they just declare this thing a toss and send everybody home? I can’t look at it anymore.’ Talk about leaving it all in the ring; these guys had nothing left at all. Joe had fury left in his heart because he believed the gloves should not have been cut off, and I think Eddie Futch did what I don’t believe the people in Ali’s corner would have done.”

Izenberg has a way of telling a story, both in print and in person, that is unmatched. Yet his humility may be even more impressive. And that may be the biggest takeaway from the book, that while we may never see a heavyweight era like the one he writes about again, we certainly don’t have too many writers like Jerry Izenberg left.

Then again, that’s the way he felt in his formative years.

“When I started writing, I had a college faculty,” Izenberg said. “I had Red Smith to give me permission to use the English language. I had Jimmy Cannon, who taught me that not everybody sounds or thinks alike. I had Frank Graham to tell me to listen more than you talk and you will learn what makes these people tick. I had a whole bunch of people like that. I was a baby. There were really some fine young writers, but they left the business. They went to television, they went to public relations, they became novelists. I just kept writing about jock straps. One day, Bill Heinz, who I admire enormously and got to know very well through Ray Arcel, he said to me, ‘Jerry, you’re a very good writer but if you don’t get out and put your writing to the use that it was really meant for, you’ll never be a nine-inning writer; you’ll always be a seven-inning writer.’ And he called it right on the money because that’s what I am; I’m a seven-inning writer.”

Not to be disrespectful, but he was wrong about disgracing himself in 1980, and he’s wrong about this as well. If anyone is a nine-inning writer, it’s Jerry Izenberg.

To order “Once There Were Giants,” click here
https://www.amazon.com/Once-There-Were-Giants-Heavyweight/dp/151071474X

[QUOTE=BIGPOPPAPUMP;17504470]When talking about the 1980 bout between Larry Holmes and Muhammad Ali, Jerry Izenberg is quick to say, "I disgraced myself that night." Far from it. As Ali took a frightful beating at the hands of Holmes, Izenberg grew more…