Ito vs. Herring and The Junior Lightweight Picture

Wake us when the thumb war between WBA titlist Gervonta Davis and IBF titlist Tevin Farmer goes somewhere more interesting. The possibilities are there. Anyone who saw the two talking smack in front of a crowd at the MGM in Maryland a year or two ago could attest to how good a promotion it could be.

On it’s own, the fight has a good story. Herring, 33, has won three straight since moving down from lightweight where he lost two of his first eighteen fights. Herring might have been a professional sooner in life but being a US Marine kept the ring a second priority. He served two tours in Iraq before representing his country again in London.

Herring didn’t medal at the Olympics and looked like a long shot for professional championships. A win this weekend would be the sort of thing that might have made for a hell of a TV movie of the week in another era. It’s a feel good story in any.

Ito will be a tough nut to crack to get there. As he showed in handing Christopher Diaz his first defeat for the vacant belt last year, Ito has heavy enough hands, stamina, a solid beard, and canny focus. He’s won nine in a row since an early career loss and, at only 28, can create big chances if he gets by his second defense this weekend.

Part of those chances will be reflected in the audience.

Various reports, including here at BoxingScene, have made the hopes of WBC titlist Miguel Berchelt (36-1, 32 KO) clear. He’d like to see the winner of this fight across the ring from him. 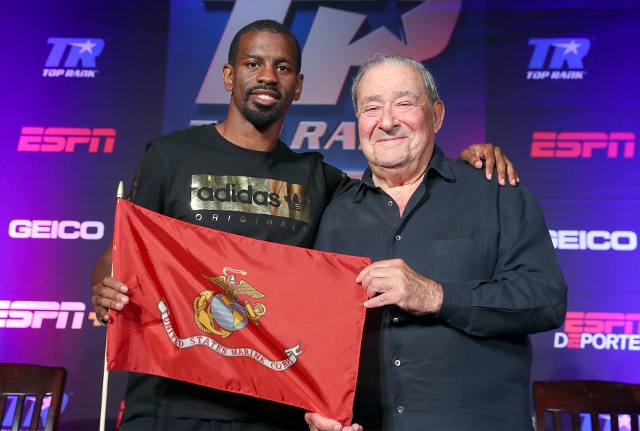 Mexico’s Berchelt, 27, made his fifth title defense just two weeks ago with another stoppage of the man he won the title from in 2017, Francisco Vargas. Prior to the fight, he’d already made noise about facing the Ito-Herring winner or moving up to lightweight to challenge Vasyl Lomachenko.

He can try to do both, starting with unification in the lower class.

As has been noted in previous columns, the current boxing landscape requires fans to manage expectations. That’s been true before but it feels truer now because the sport isn’t just divided between two major premium cable networks. Fans can and should pine for the fights they want to see no matter the obstacles.

That’s part of the fun.

But it doesn’t hurt to ask what good fights are most realistic and where each outlet has the most likelihood of delivering quality.

For ESPN and their marriage to Top Rank that includes asking fans to pay for streaming service and occasional pay-per-view as well, a showdown between Berchelt and the Ito-Herring winner, with a possible lightweight title challenge from the emerging unified titlist possible next year, could be one place they could provide quality.

It might not be as robust as what PBC can offer right now at welterweight and Jr. middleweight, what DAZN can at middleweight, or even what ESPN can at light heavyweight, but it’s at least a realistic possible direction fans can follow as it unfolds.

And it can be intriguing with any outcome this weekend. If Herring wins, he can try to parlay his feel-good story into a bigger payday. A win for Ito leading to Berchelt would sell itself; Ito-Berchelt on paper would be a fantastic piece of violence.

All the while at lightweight, Lomachenko will be chasing down all the belts and, barring a move to Jr. welterweight, will need opponents. One of them might be in the ring this weekend.

From this corner, the Game of Thrones finale came off pretty solid. Was it perfect? No, but it was fitting in most ways, well acted, and the final shot was great. That said, where the hell were the Dothraki? Must be a deleted scene…Devin Haney probably lost some eyes for his DAZN debut when Oleksandr Usyk was forced to postpone his heavyweight debut but he can still make an impression and has the stage to himself…Austin Trout-Terrell Gausha is oddly compelling and if it’s not Ito-Herring this could be the crowd pleaser of the weekend…Pacquiao-Thurman is the perfect fight for both guys right now and could do a much larger number on pay-per-view than many might guess at right now.

Berchelt doesnt need to move up to fight Loma, Loma would come down to 130 for big unification fights with pleasure