Madrimov’s vicious assault in the sixth round caused referee Shawn Clark to step in and halt what had become a brutal beating at Madison Square Garden. Uzbekistan’s Madrimov unloaded numerous head and body shots on the game Gonzalez, who tried his best to cover up in that final round.

Their scheduled 10-round junior middleweight match was stopped at 49 seconds of the sixth round on the Gennady Golovkin-Steve Rolls undercard. 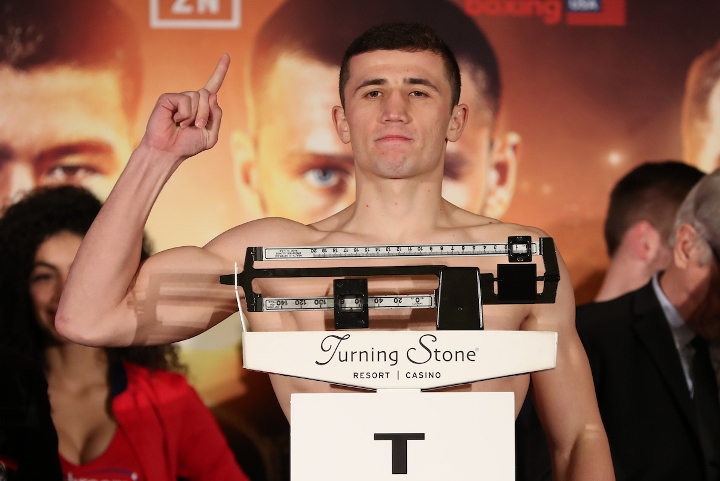 Uzbekistan’s Madrimov, 24, improved to 3-0 and produced his third knockout.

The 38-year-old Gonzalez (24-13, 13 KOs) fought just nine days before boxing Madrimov, yet still was approved by the New York State Athletic Commission to oppose a powerful prospect. The Mexican veteran won an eight-round unanimous decision over Alberto Pacheco (4-13-1, 2 KOs) in that match May 30 in Monterrey, Mexico.

Madrimov hammered Gonzalez with left hooks and right hands to the head, as well as left hooks to the body throughout the fifth round. He picked up right where he left of in the sixth round, when he knocked a retreating Gonzalez all over the ring.

Madrimov drilled Gonzalez with a left hook about a minute into the fourth round. Another left hook by Madrimov caught Gonzalez flush about 30 seconds later.

Madrimov hurt Gonzalez with a right hook when there were about 45 seconds to go in the fourth round. He tried to finish his game opponent, but Gonzalez survived.

Madrimov landed hard shots to the head and body during the second round. Gonzalez had some success in the final minute of the second round, but couldn’t land a punch that impacted Madrimov.

In his previous fight, Madrimov knocked Frank Rojas unconscious in the second round March 9 in Verona, New York.

Madrimov needs to calm down a little. Good win for his third fight but there's nothing wrong with taking your time and setting things up.

Impressive by the young yet seasoned pro. Was entertaining and got the stoppage over a grizzled vet.