Kazuto Ioka reached a point in his boxing career where he was simply done with the sport.

Like most boxing retirements, his time away from the ring was relatively brief. Unlike most comebacks, however, there was a driving force to Ioka’s return upon which he plans to expand in 2020.

“For us, there is no need to carefully pick our opponents,” Taku Nagashima, Ioka’s manager told BoxingScene.com of his client’s plans to conquer what remains a loaded 115-pound field. “At this point of his career, Kazuto wants to fight the best.”

A key to creating a path towards super fights in the new year was taking care of necessary business to wrap up his prior 12-month campaign. The four-division and reigning junior bantamweight titlist returned to a year’s long tradition of defending a major title on New Year’s Eve in his native Japan. The latest occasion came against unbeaten mandatory challenger Jeyvier Cintron (11-1, 5KOs; 1ND), a two-time Olympian for his native Puerto Rico and crafty southpaw whom Ioka outpointed Tuesday evening in Tokyo. 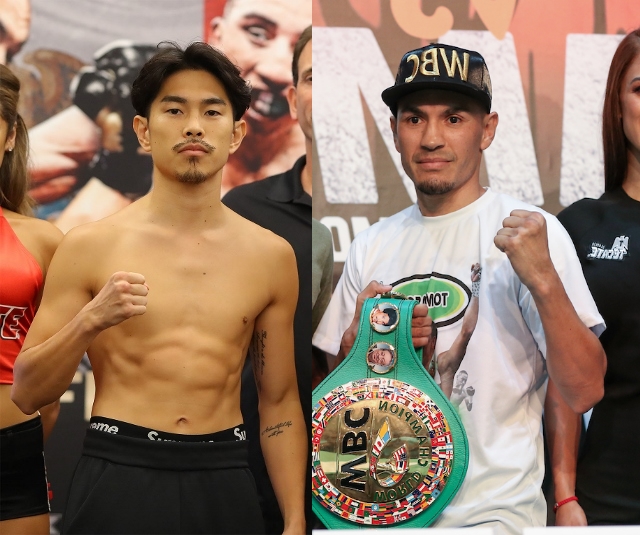 The win came six months after making history for his home country, becoming the first-ever male boxer from Japan to capture major titles in four weight divisions following a 10th round stoppage of Aston Palicte to win a 115-pound crown last June. With the mandatory defense now out of the way, Ioka (25-2, 14KOs) is free to take on any approved voluntary title defense for at least his next ring adventure.

The 30-year old future Hall of Famer isn’t at all looking for a soft touch; quite the opposite as the firm goal remains to unify the division, at least partially if not in full. Clear in his sights is the man regarded as the very best junior bantamweight in the world in lineal 115-pound champion Juan Francisco Estrada (40-3, 27KOs), who is currently recovering from a hand injury but is hopeful to return to the ring as early as May.

Not very far behind the pound-for-pound entrant from Mexico are the division’s remaining titlists in England’s Kal Yafai (26-0, 15KOs) and Philippines’ Jerwin Ancajas (32-1-2, 22KOs), although both are due to return to the ring in the first quarter of 2020, which brings right back to the best available—and toughest—option for what he hopes to achieve in the year ahead.

“I believe that best fighter that will make Kazuto a clear underdog is Juan Estrada,” acknowledges Nagashima. “Win or lose, I know Kazuto will gain respect and add to his legacy. There is also rumors of a Yafai and Gonzalez match [targeted for February 29 in the greater Dallas area]. We would like to fight the winner, but definitely we are not going to allow other fights to control our timeline.

“Ancajas has to probably fight another mandatory for IBF and we prefer to fight an orthodox fighter [next]— and the toughest challenge would be Estrada. So, we will think long and hard and make the best decision that would allow Kazuto to fight his toughest fight to date.”

[QUOTE=komandante;20298940]These guys are avoiding Nietes and Ancajas.:moon:[/QUOTE] He fought Nietes, lost a close SD and Nietes ducked the rematch So no...

These guys are avoiding Nietes and Ancajas.:moon:

Why Arum can not promote Ancajas the most avoided superfly!