If Degale is Healthy, He Beats Eubank. If Not, He Might Be Done.

James DeGale really is at a crossroads. The Olympic and two-time professional champion, his body having failed him, hasn’t been the fluid, fleet-footed boxing whiz of old for several years. The slower, more deliberate version, now 33, has been decent but nothing special.

Enter Chris Eubank Jr., a tough, but limited boxer who will test DeGale’s fitness in a super middleweight fight Saturday at the O2 Arena in London.

Eubank at his best probably couldn’t compete against DeGale at 75 percent but he has hope because we might never again see the 2008 gold medalist anywhere near his best. One betting outlet reportedly has Eubank listed as a 7-4 favorite, an obvious nod to DeGale’s questionable health.

DeGale and his longtime trainer, Jim McDonnell, insist that he’s as fit as he has been in years. If that’s true – and I believe them – I envision DeGale winning a wide decision or possibly stopping Eubank in the late rounds.

“I’m in the best shape I’ve been for a long, long time. When I feel like I feel no one can beat me,” DeGale said at Friday’s weigh-in, at which he came in at 166 pounds.

If it’s not true? If his body is still in disrepair? The door will be open for Eubank to win and possibly send DeGale into retirement.

That’s not an exaggeration. If injuries continue to haunt him, it’s not difficult to imagine him walking away. After all, if James DeGale can’t be James DeGale, there’s no point in continuing aside from what would become dwindling paychecks.

Plus, DeGale told more than one media outlet that he would retire if he loses to Eubank.

DeGale’s problems first became a major concern when he and Badou Jack battled to a draw in January 2017, a bout in which the left-handed DeGale said he fought with a right shoulder injury. He had surgery to repair the damage and didn’t fight again for almost 11 months.

And the then-IBF super middleweight titleholder was far from 100 percent in his comeback fight, which he lost to underdog Caleb Truax by a majority decision. DeGale regained his belt by outpointed Truax last April but still didn’t look like the fighter who couldn’t be touched only a few years earlier.

One possible reason beyond the shoulder was Achilles’ tendonitis the past few years, according to DeGale. That would explain the difficulty he had moving his feet in the Truax fights.

That was then, though. The shoulder, according to DeGale and Co., has healed and treatment has alleviated the pain he says he was experiencing in his Achilles’ tendons, which has allowed him to move about the ring as he once did. 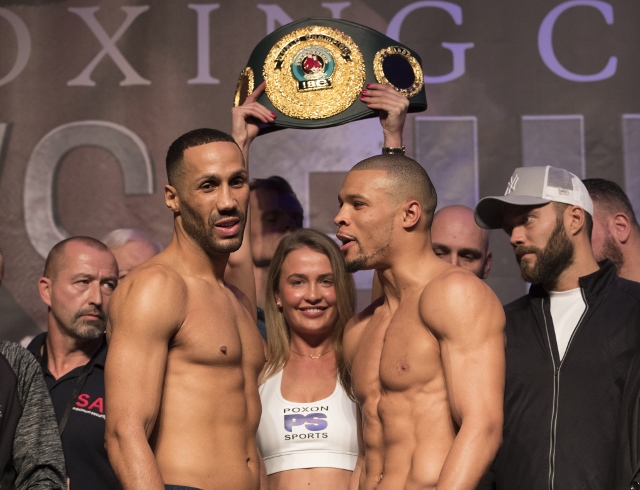 DeGale stopped badly faded former contender Fidel Monterrosa Munoz in three rounds in an under-the-radar light heavyweight “fight” on the Brandon Figueroa-Oscar Escandon card in California in September but that mismatch told us little about the state of DeGale’s body.

The real test, it seems, will be on Saturday.

Eubank, the son of the former champion of the same name, can’t match DeGale’s ability but he’s a capable, tough veteran with considerable power who is expected to push his opponent. And he’s motivated. Eubank has lost his two biggest fights – against Billy Joe Saunders in 2014 and George Groves last year – which reinforced the notion that his name is more significant than his ability.

Junior knows that this might be his last chance at this level of competition, which makes it crossroads fight for him, too.

I believe we’ll see a reasonable facsimile of DeGale at his best, meaning he’ll be able to move more than well enough to frustrate Eubank, win convincingly and set himself up for more important, big-money fights going forward.

I’m not 100 percent convinced, however. Once the body begins to break down in boxing, I’ve noticed over the years, it’s difficult to reverse the process. It’s possible that DeGale is overstating his fitness level or has convinced himself and those around him that it’s higher than it really is.

And, of course, even if he feels good entering the ring, his body could break down again under the rigors of battle. We’ve seen that happen to fighters like Sergio Martinez and David Haye, although I don’t believe DeGale’s body is anywhere near as damaged beforehand as that of Martinez and Haye.

I think Degale still has enough to win this

[QUOTE=SuperHanz;19533628]Degale can't resist a tear up. I think he outboxes Eubank early, but gradually gets drawn into a brawl. Then it's anyone's fight.[/QUOTE] That's what I'm thinking.

Prime DeGale wins this, but he was awful in his last performances. DeGale is a very talented boxer, I think he is much better than you normally "see". But he's incosistent. I'm not sure, but I think he isn't motivated…

I think Eubank is simply a brawler and the old degales style would have been murder for him. Now that James reflexes have diminished a bit it makes his defense significantly less effective bc he does not parry much. If…

Battle of the bums