For the second time in as many days, Richard Commey and Teofimo proved fit to fight at the scales.

Both boxers were in compliance with the International Boxing Federation (IBF) second-day weigh-in policy, where sanctioning body participants are required to weigh no more than 10 pounds above the contracted weight on the day of the fight. 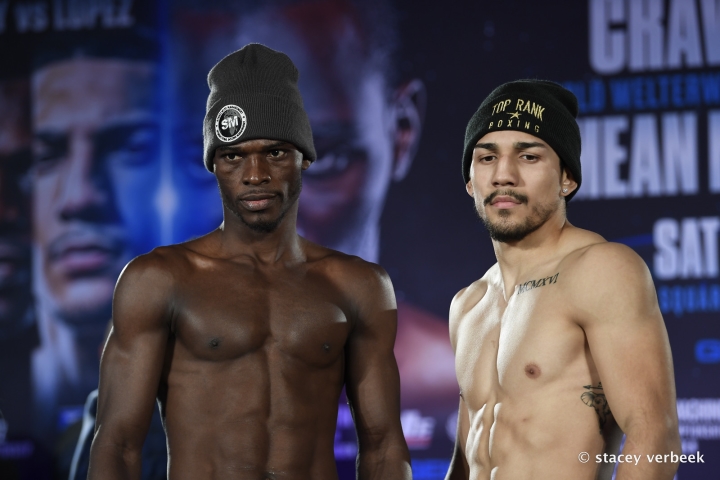 With the same-day limit set for 145 pounds, Commey checked in at 144 pounds, while Lopez was 144.4 pounds, clearing the path for their highly anticipated title fight showdown Saturday evening at Madison Square Garden in New York City.

Commey and Lopez both easily hit the mark at Friday’s official weigh-in as well. Ghana’s Commey (29-2, 26KOs)—who now lives in and trains out of The Bronx—hit the scales at a fighting fit 134.2 pounds for the second defense of the IBF title he acquired ten months ago. Lopez (14-0, 11KOs)—a Brooklyn-born 2016 Honduras Olympian—tipped the scales at a trim and ready 134.4 pounds for his first career title fight.

The bout airs live on ESPN, in supporting capacity to a welterweight title fight between unbeaten pound-for-pound entrant Terence Crawford (35-0, 26KOs) and mandatory challenger Egidijus Kavaliauskas (21-0-1, 17KOs). However, most boxing experts—and even the event handlers, by admission—have the lightweight title fight pegged to steal the show.

Commey claimed the title with a 2nd round knockout of Isa Chaniev this past February in Frisco, Texas. The same show saw Lopez fight for the first time in the year following his 2018 Prospect of the Year campaign, as he stopped former title challenger Diego Magdaleno in seven rounds.

Lopez added wins over Edis Tatli and previously unbeaten Masayoshi Nakatani to position himself as the IBF mandatory challenge. Along the way, Commey managed a successful first defense with a one-sided 8th round stoppage of former titlist Rey Beltran this past June.

[QUOTE=JakeNDaBox;20254442]Yup if anything it’s the opposite. No weight check means they’re probably coming in as middleweights. I will say, the very early Fri AM weigh in was... odd. Actually made the period that much longer for second day weight check.[/QUOTE]…

[QUOTE=NC Uppercut;20254352]No it’s not a catch weight fight. It’s a lightweight fight where the IBF requires their fighters to do a same day way in. That’s it, nothing more or less. They have to be 135 or less day before…

No it’s not a catch weight fight. It’s a lightweight fight where the IBF requires their fighters to do a same day way in. That’s it, nothing more or less. They have to be 135 or less day before and…