Hunter: Whyte Should Take Time Off, Too Soon To Have Rematch

Hunter, who fought to a draw with Povetkin in December 2019, felt the Russian boxer's style was all wrong for Whyte.

Povekin had been down twice in the fight, when he connected with an uppercut to brutally knock Whyte out in the fifth round.

"As far as technique, he is made to fight Whyte. And that's how it went. I call it like I see it. If Whyte has the right mind-set, and carries it all the way through until he fights Povetkin, then he would definitely beat him. Then there would be a trilogy," Hunter said to Sky Sports. "I was more surprised that Dillian dropped Povetkin in the first few rounds, than Povetkin actually knocking him out." 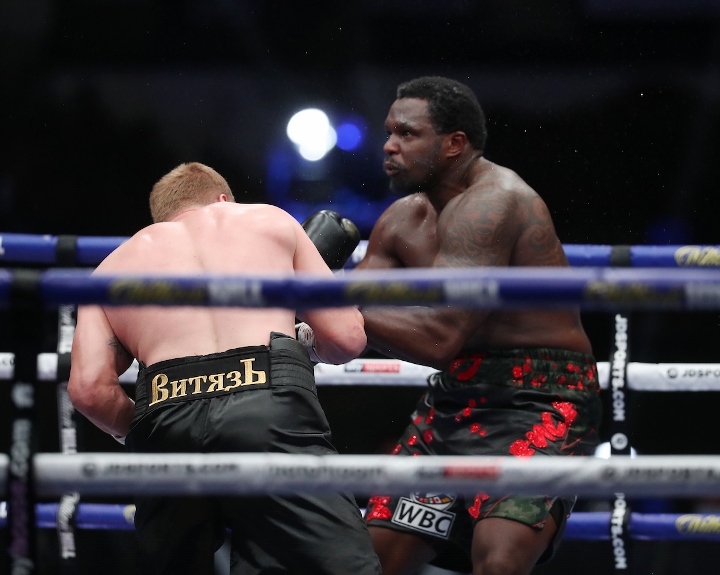 Whyte is planning to exercise an immediate rematch clause, with his team targeting the month of November for the second fight.

There are many who believe Whyte, after suffering a devastating knockout, is rushing too quickly to a rematch - and Hunter is one of those people.

He also feels that a boxer who suffers such a devastating knockout will always have a lingering wound in their thought process.

"There will always be, because he got knocked out," said Hunter.

"That's not to say he can't put a band-aid on it, or be stronger than before. But it is a wound, it is an open cut. Depending on his energy, depends on how healed he is from the situation.

"I think it is a little too soon for him to have a rematch. I think it would be a good idea to take some time off. He can get that fight back - he has enough clout and notoriety to fight another fight, get mentally strong, let the wounds heal, then go back to war with Povetkin."

If the rematch ever happened, Whyte will not go near Povetkin. He would try to box from the outside and attempt to win by UD. There's no way Povetkin will not catch him again if he fights in the inside

[QUOTE=Jkp;20744965]Whyte got confirmed as b grade at best the instant he got ko'd by povetkin. Something most people already knew. He's probably the most hated heavyweight in the world. I don't think hated B grade journeymen whyte vs 40 year…

[QUOTE=Ant1979;20744936]Honestly, the Povetkin fight will do far better UK PPV numbers than an Ortiz or Parker fight because of the first fight. 4 and a bit rounds of action with 3 knock downs and a KO to savour. Plus there's…

[QUOTE=Jkp;20744567]Poverkin isn't a bigger draw than Parker or ortiz. Especially now since he beat Whyte so convincingly. There was little interest in first fight, the stadium was almost empty, and will be less interest in 2nd fight.[/QUOTE] Honestly, the Povetkin…

[QUOTE=Ant1979;20743327]Why would he fight those guys though when he not only gets paid more for rematching Povetkin but if he beats him he regains his WBC mando status? AJ is tied up Pukev, then hopefully 2 x fights with Fury…