The junior featherweight division is looking to better identify who will have world championship opportunities in the near future.

Azat Hovhannisyan will fight Franklin Manzanilla on Sept. 5 for a WBA 122-pound eliminator. The 12-round main event fight will take place at the Belasco Theater in Los Angeles.

Hovhannisyan and his manager Neils Torring signed off on the contract and fight at Golden Boy Promotions headquarters, they each told Boxing Scene on Friday. 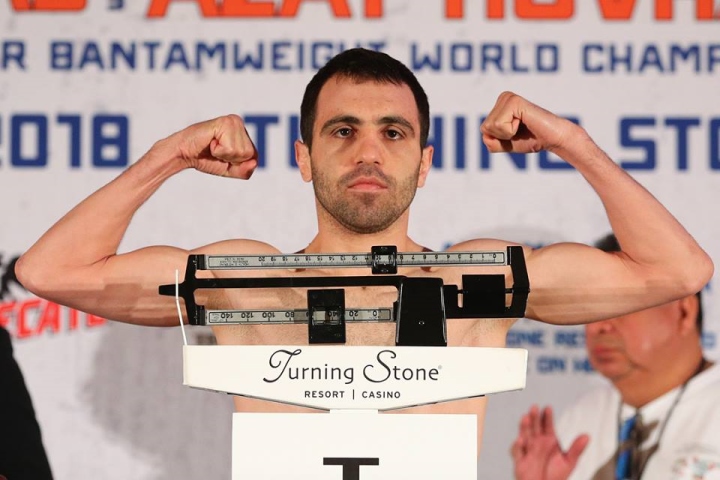 Nicknamed “Crazy A,” the crowd-pleasing Hovhannisyan (17-3, 14 KOs) is a hard-charging Armenian who trains with Freddie Roach at the Wild Card Gym in Los Angeles. He’s riding a three-fight winning streak since dropping a decision in a competitive brawl with current WBC champion Rey Vargas.

“I want to win this fight convincingly and put on a show to get my long-deserved world championship opportunity. I’m ready to become a world titleholder,” Hovhannisyan told Boxing Scene. “I don’t think Manzanilla is a good boxer. He lacks footwork and fights pretty wildly.”

The punch-packing Manzanilla (18-5, 17 knockouts) was last in the ring against Vargas, too, this February. He knocked down Vargas in the second round with a vicious left hook but failed to do much else in a fight that he lost 117-108 on all three judge’s scorecards.

The 31-year-old from Yerevan and former Vic Darchinyan understudy has been leaning on Roach to help him nullify Manzanilla’s offensive attack.

“He appears to be powerful and has endurance,” said Hovhannisyan. “I’ve been working on my defense a lot and increasing my endurance. I’m looking forward to breaking him down and getting the win.”

lame! i wanted to see him at StubHub/dignity health in carson,ca where boxing scene said he would be on the undercard of munguia and garcia card.

This sounds like it's going to be a very enjoyable fight. Hovhannisyan isn't most skilled but he's fun to watch and the guy he's fight doesn't sound like a master technician so should be plenty of fireworks here.