The World Boxing Organization has revealed that Top Rank was the winner of Tuesday's purse bid, to secure the promotional rights for the mandatory fight between WBO junior welterweight champion Maurice Hooker (24-0-3, 16 KOs) and challenger Alex Saucedo (28-0, 18 KOs).

Last month, the two sides were given twenty days (20) to reach a deal. Because a deal was not reached, a purse bid was ordered by the WBO. 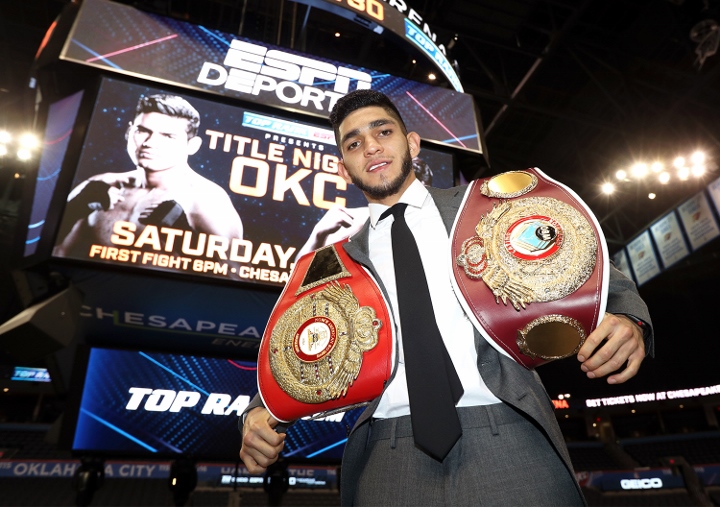 Top Rank informed the WBO that Hooker vs. Saucedo will take place in Oklahoma City on Nov 16 or 17.

In Top Rank winning, Hooker vs. Saucedo will be heading to ESPN.

Back in June at the Manchester Arena, Hooker traveled across the pond to pulled off an unexpected upset - with a twelve round split decision over Terry Flanagan to win the vacant WBO junior welterweight crown.

Flanagan, who held a world title at lightweight, was the heavy favorite going in, but seemed flat in the contest and had issues with Hooker's style.

Hooker recently finalized a co-promotional agreement with Eddie Hearn's Matchroom USA - and he will be featured on the DAZN, which is the new streaming service that Hearn inked a multi-year agreement with.

The World Boxing Super Series wanted Hooker for their upcoming junior welterweight tournament - but the WBO was not allowing him to bypass his mandatory defense.

On the other end, Saucedo was involved in a wild war with Lenny Z on June 30th in Oklahoma City. Both fighters were badly cut up and Saucedo saw himself in serious trouble during the fourth round.

Saucedo, who is trained by veteran coach Abel Sanchez, was able to weather the storm and stopped Lenny Z in the seventh round.

[QUOTE=Butch.McRae;19020354]S/o to Eddie for inflating the purse here. I love it when fighters get more money. This isn't good for his DAZN play, but who cares lol he can just be the new Roc Nation and get these fighters more…

[QUOTE=Sid-Knee;19020556]When Hearn talks about overpaying fighters he's talking about Joshua's opponents, not all fighters.[/QUOTE] No sir. He has said multiple times that fighters should be running to DAZN because he is in a position to "overpay" fighters right now. He…

[QUOTE=Randall Cunning;19021123]Haha Im done with the guessing, just gunna wait and see. Im assuming the free trials up come the Nov 17th card, and the big name(s) will be dropped for the lead up, to keep people subscribed. Jacobs/Derevyanchenko moving…

Once he secured the DAZN deal and set Matchroom USA, rather than go into a dick measuring contest against Haymon, he should've made the beeline to HBO and scooped up every fighter not tied with Golden Boy or interested in…

[QUOTE=KTFOKING;19021110]Because putting Hooker/Saucedo in Boston doesn't make all that much sense. Thought maybe he would put a card in Texas or something since Oklahome isn't that far from there. But what kind of fighters are we expecting for November? Give…