Part of the vision shared by Maurice Hooker, Roc Nation Sports and Matchroom Boxing USA was to stage a massive homecoming fight in the greater Dallas area.

That wish was granted, in the form of a 140-pound title unification bout with California’s Jose Carlos Ramirez. It also resulted in his first career loss, as Hooker was stopped in the 6th round of a Fight of the Year contender Saturday evening at College Park Center in Arlington, Tx., mere miles from Hooker’s Dallas hometown.

A lively crowd was on hand for the DAZN-streamed event but couldn’t have jumped off to a worse start for Hooker, who was gigged for an opening round knockdown that never should have been ruled as such. Ramirez managed to flick a jab, which referee Mark Nelson saw thrown before watching Hooker fall to the canvas. 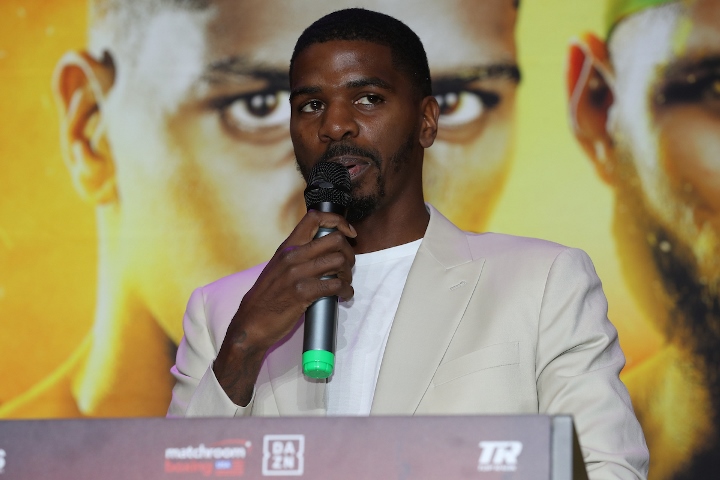 What was missed was Ramirez stepping on his opponent’s foot which caused the fall.

“It didn’t affect me, I knew I had to get back in there and work my jab,” admitted Hooker (26-1-3, 17KOs), who fell into an early hole on the scorecards before storming back strong in round three. From there emerged a fever-pitched two-way battle which had the crowd on its feet and fans at home racing to social media to react to the thrilling action.

It all crashed and burned in a hurry for the local favorite, however, when he found himself under attack early in round six. Ramirez managed to stun Hooker, unloading on the ropes until forcing the third man stop the contest midway through the round.

“The first knockdown didn’t affect me,” said Hooker, who was looking to make the third defense of the title he won last June. “I just knew I had to come back and use my jab. When he had me on the ropes, he didn’t really catch me with anything. I was blocking everything.

“I just lost focus for a quick second. I was playing around with my jab hand and I lost focus. That just shows you, one second with a top fighter can change everything. I was trying to catch him but it didn’t work out.”

The fighter in him wanted to continue, but Hooker instead lives to fight another day. It’s more than can be said for the sad fate that was met recently fallen ring warriors Maxim Dadashev, 28, and Hugo Santillan, 23, both of whom passed away this week from in-ring injuries suffered last weekend.

Both were honored along with late, legendary Pernell “Sweet Pea” Whitaker during a ceremonial 10-count prior to Saturday’s main event. While undoubtedly let down over the loss, Hooker is grateful the fight didn’t continue to a point where the next 10-count could have been in his honor.

“Two fighters died this week and I didn’t want to be the third,” Hooker acknowledged while in Ramirez’s locker room to pay respect to the newly crowned unified titlist, in a moment captured by Top Rank/ESPN commentator Crystina Poncher (not on assignment Saturday). “The ref did the right thing because I was hurt.”

The man has nine kids to support and look after so the referee did the right thing. His comments reflects a level of maturity and growth which is rarely seen in fighters these days. Most fighters are taught to be…

[QUOTE=kidaguilar;19942809]I felt tha the referee allowed Hooker to take a few huge unnecessary punches.[/QUOTE] it just happened so fast.. i cant believe some say it was stopped too early.. hooker was defenseless so ramirez could have easily landed three more…

[QUOTE=champion4ever;19942649]That's very gracious of Hooker. He is a good man and a very good sport. Personally, I would like to see him move up to the 147 lbs division.[/QUOTE] I Agree, people don't realize that the weight cut is one…

Time for Hooker to hang em up

I agree with Hooker. I don’t understand why some people are criticizing the stoppage saying it was early. It LOOKS early in slow-mo but watching it real time the fight action was so fast that the ref stepped on in…