Maurice Hooker issued a warning for those impressed with how Alex Saucedo came back from serious trouble to knock out Lenny Zappavigna.

“First, he fought a midget,” Hooker told BoxingScene.com. “The midget hurt him, but couldn’t put him out. I’m a big guy. I’ve got power in both hands.”

Australia’s Zappavigna, who’s generously listed at 5-feet-7, hurt Saucedo badly during the fourth round of their June 30 fight in Oklahoma City. Those three minutes mostly amounted to target practice for Zappavigna, but the resilient Saucedo survived that onslaught and stopped a battered, bloodied Zappavigna during the seventh round. 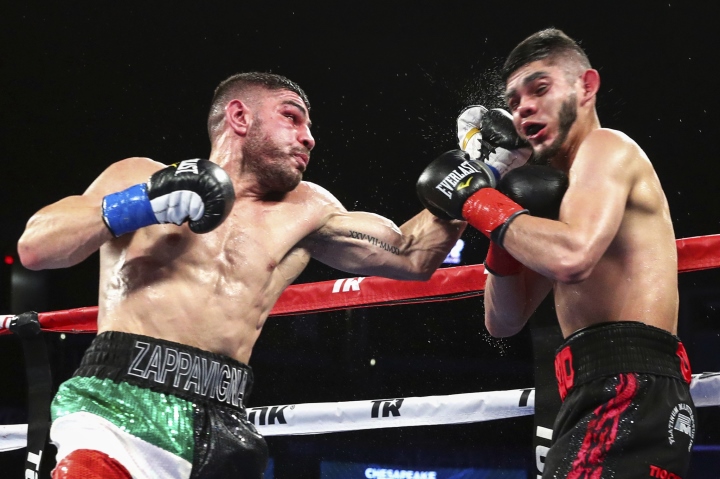 As difficult as that fight was for Saucedo (28-0, 18 KOs), it earned the undefeated contender a shot at Hooker’s WBO junior welterweight title.

They’ll fight Friday night in a 12-round, 140-pound championship match ESPN will televise from Chesapeake Energy Arena in Oklahoma City, Saucedo’s hometown. Hooker-Saucedo will be a one-bout broadcast, scheduled to start at midnight ET/9 p.m. PT.

“He’s tough and he keeps coming,” Hooker said. “That’s it, you know? Like in his last fight, he was tough. But being tough ain’t gonna win you the fight. He’s not gonna beat me.”

Hooker and Saucedo sparred against each other many times eight years ago. At that time, they both were managed by Arnie Verbeek and trained out of the Maple Avenue Boxing Gym in Hooker’s native Dallas.

The taller, longer Hooker expects to keep the aggressive Saucedo at a distance in the first defense of his title.

[QUOTE=BIGPOPPAPUMP;19274718]Maurice Hooker issued a warning for those impressed with how Alex Saucedo came back from serious trouble to knock out Lenny Zappavigna. "First, he fought a midget," Hooker told BoxingScene.com. "The midget hurt him, but couldn't put him out. I'm…

Call him old, call him a midget however we all know that fight was stopped due to the bleeding causing vision problems. Offer Zappavigna the fight if it's easy work! Hooker your a B**CH, Ramirez mauls you and Prograis rapes…

[QUOTE=indelible;19274948]Hooker better make sure this does not go to the judges cause we all know what happens when you're fighting in someone else's hometown[/QUOTE] On a Top Rank card no less

This has the potential to be a cracker. Saucedo/Zappa was a jaw dropper