Hogan: Munguia Fight Is Behind Me, It's In The Past

With another title fight looming ahead, Dennis Hogan has finally come to grips with leaving the previous one far in the rearview mirror.

An upcoming challenge of unbeaten middleweight titlist Jermall Charlo (29-0, 21KOs) marks the first piece of ring action for the 34-year old from Australia by way of Ireland since a widely disputed 12-round points loss to Jaime Munguia in their 154-pound title fight this past April in Monterrey, Mexico. Most observers had Hogan doing enough to end Munguia’s title reign, only for the three judges to decide otherwise in handing down a majority decision verdict in favor the defending titlist.

While a moral victory hardly compares to the real thing, the fight itself at least left the declared losing boxer with plenty on which to build.

“I genuinely felt like I won,” Hogan (28-2-1, 7KOs) reiterated during a recent media conference call to otherwise discuss his bout with Charlo this weekend at Barclays Center in Brooklyn, New York (Saturday, SHOWTIME, 9:00pm ET). “It’s not like when I lost before and had to go do some soul searching. So many people came up to us and told us we won the fight, so it’s not just me saying I felt like I won. I know I won that fight.

“After the fight , we took a couple of weeks off and got back into training. It is what it is, and only will only make me stronger for the future.” 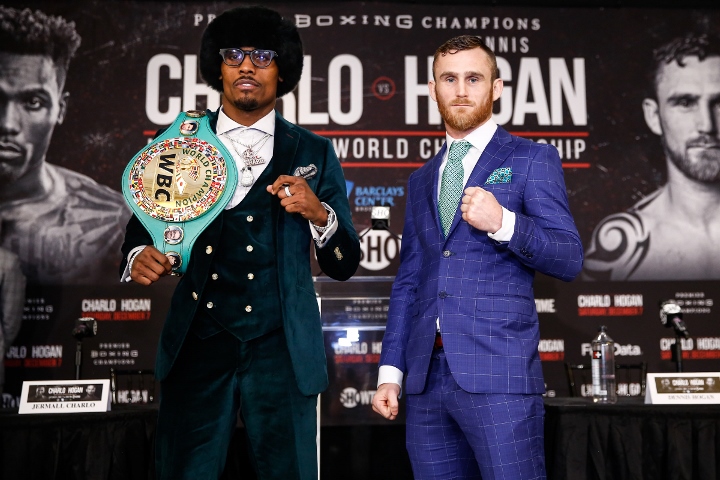 Hogan’s team filed an official protest with the World Boxing Organization (WBO), whose title Munguia has held since last May. Hopes of a reversal in fortune fell on deaf ears, as did a plea for an immediate rematch. With that came new business, as Hogan was looking at a 154-pound title eliminator versus Erickson Lubin before eventually agreeing instead to a move up the scale and a shot at Houston’s Charlo.

“We did chase the rematch and found out that was a dead end,” noted Hogan, who saw a six-fight win streak come to a close following the controversial loss.

“We had [Lubin] locked in for a title eliminator but that fight fell through. It was a tough couple of months to make the fight happen, but we kept our head down and had faith in the team. Credit to the team for making it happen and now we look forward to a cracking fight.

“As for what happened in Mexico, that fight is behind me. It’s now in the past.”

Hogan is a busy fighter and that may persuade some that the beat Munguia but his problem is that he can't hit hard. Any boxer who regularly fails to put opponents away is going to have a problem getting a…