Herring: Oquendo A Seasoned Vet, I'm Going In Saying This Is Toughest Fight Of My Career

From the moment the fight was announced, Jamel Herring already braced for the incoming criticism.

The year-long 130-pound titlist was hoping for a high-profile title defense versus former two-division champion Carl Frampton, only for the ongoing coronavirus pandemic to ruin those plans. Instead came the backup plan of a voluntary defense, with Herring now set to face Jonathan Oquendo (31-6, 19KOs) atop the July 14 edition of Top Rank Boxing on ESPN live from MGM Grand Conference Center in Las Vegas.

“Look, I know this isn’t the fight that everybody wanted to see, but it’s the fight my team felt comfortable with under the circumstances,” Herring (21-2, 10KOs) told BoxingScene.com. “I’ve spent all year preparing mentally and physically for Carl Frampton. When the corona (pandemic) shut that down, we had to make due with opponents who were ranked and available.” 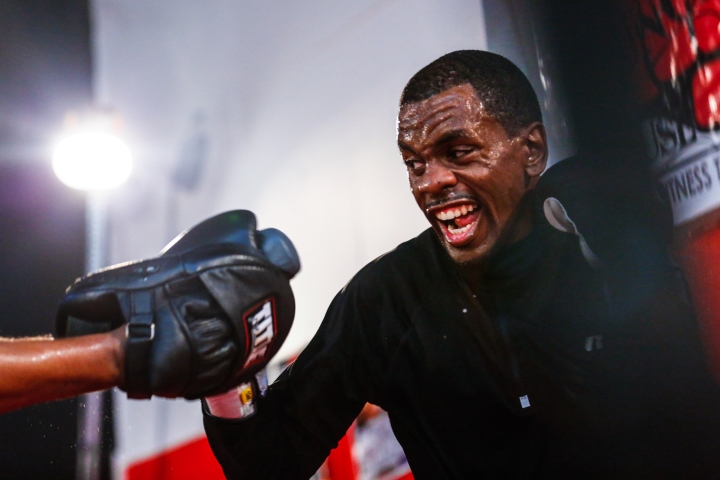 A number of junior lightweights called for a showdown with Herring, a 34-year old southpaw from the Coram section of Long Island, New York. Among the list were a trio of boxers who—like Herring—fight under the Top Rank banner: Albert Bell, Abraham Nova and Andy Vences.

Of the three, only Nova was ranked by the WBO whose title Herring has held since a 12-round win over Japan’s Masayuki Ito last May. Nova was instead delivered a June 25 ESPN showcase versus Avery Sparrow, against whom he largely struggled before claiming a 10-round decision win.

Vences was sent to the back of the queue following a split decision loss to Luis Lopez on July 8. Bell picked up a win on the July 2 edition of Top Rank Boxing on ESPN—the show in which Herring was originally due to face Vega Alta, Puerto Rico’s Oquendo (31-6, 19KOs). The title fight was postponed after Herring tested positive for COVID-19, though detected at the tail end and thus postponing the fight by just 12 days.

Meanwhile, Oquendo—ranked #11 by the WBO—has all along fit the mold in terms of dimensions and fighting style in further preparing for a clash with Belfast’s Frampton (27-2, 15KOs) later this year. Of course, none of that will matter should Herring treat Oquendo like anything other than a hungry, upset-minded veteran looking to end his title reign.

“Oquendo is still a seasoned vet. My mindset, I’m going in saying it’s the toughest fight of my career,” Herring insists. “Anyone who’s paying attention to these recent shows from Top Rank (from behind closed doors in Vegas), we’ve seen a lot of upsets already in the past few weeks. They were entertaining fights, and in the end we’re seeing guys you don’t expect who are getting their hands raised.

“That’s why, I don’t even call this a tune-up. Once you get that mentality, you become lackadaisical. That’s how upsets happen. It’s not just winning these fights but how you win. I know all of the fights I want after this—Frampton, (WBC 130-pound champ) Miguel Berchelt, (WBA “Super” 130-pound titlist Leo) Santa Cruz, even my old Olympic teammate (IBF titlist) Jo Jo Diaz. I also know that none of those fights happen if I even think about looking past Jonathan Oquendo.”

I'm not expecting the upset here, but it absolutely wouldn't surprise me either. Jamel's a good dude and it's hard not to like the man and his attitude but he ain't an elite boxer and never will be... and at…

Smart thinking from Herring, Oquendo could upset him cuz I thought he beat Roach better than Herring did! It should be a decent fight!

[QUOTE=Greenfield02;20655542]I like Herring he's a good guy, fellow Veteran. But what does it say about boxing and him as a champion? That he's calling Oquendo his tuffest fight. It's actually pretty sad that as a champion your fighting a guy…

Herring has the perfect mindset being both realistic and humble. Oquendo is very tough and has won 5 of his last 6 fights and the Oquendo/Roach fight was very close which showed Oquendo is motivated and is a quality contender.

I like Herring he's a good guy, fellow Veteran. But what does it say about boxing and him as a champion? That he's calling Oquendo his tuffest fight. It's actually pretty sad that as a champion your fighting a guy…