KISSIMMEE, Fla.—Jamel Herring’s super featherweight title win over Masayuki Ito put him in rare company, becoming just the third Long Island (N.Y.)-bred boxer to win a major title and the first U.S. Marine to since 1982 to accomplish the feat.

Now he wants to become the first boxer to do something that no other super featherweight has been able to do since 2005: unify the titles.

“I’m here to make every fight count, I won this belt and now I’m ready for the next one,” Herring (20-2, 10KOs) told BoxingScene.com after his WBO 130-pound title win Saturday evening in front of a beyond-capacity crowd at Kissimmee’s Osceola Heritage Park. “In today’s world, you have to stand out. So, why not stand out by being a unified champion.” 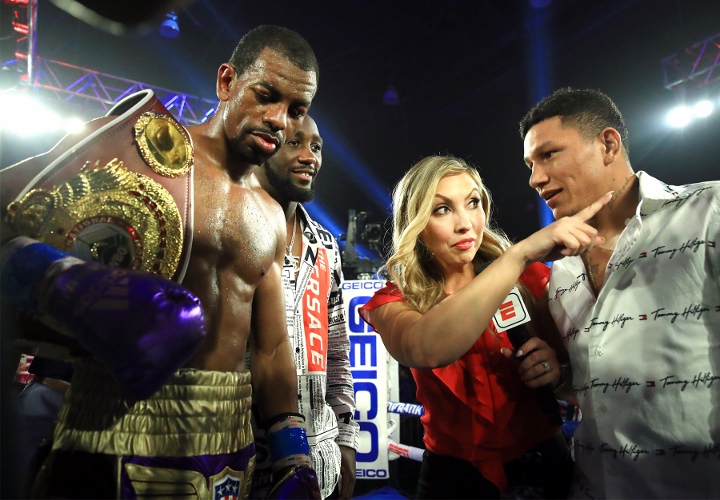 As long as it took for Herring to scratch and claw his way to the top, he’s not looking to waste any time now that he’s in a position to further the division. He entered Saturday’s bout as a marginal underdog, but rode a tidal wave of momentum to thoroughly outbox Japan’s Ito and end the 28-year old’s title reign after just 10 months.

Saturday was about Herring reflecting upon and representing the past—the Memorial Day weekend honoring all servicemen who lost their lives in combat, the memory of his late daughter Ariyanah who died from SIDS disease at just two months of age and would have turned 10 on Saturday, along with the aforementioned history he’s achieved.

Throughout the fight and the moment the belt was around his waist, though, bore witness to what could lie ahead in his immediate future. Seated ringside was long-reigning 130-pound titlist Miguel Berchelt, who was two weeks removed from his repeat stoppage win over Francisco Vargas and has been vocal about wanting Saturday’s winner.

Now that the night has produced one, it’s time for those next steps.

“Both guys want the fight and we are in the position to make it happen,” Hall of Fame promoter Bob Arum told BoxingScene.com. “Miguel is coming off a terrific performance (versus Vargas), and Jamel looked sensational tonight against (Ito).”

Emphasizing on the gentleman’s side of boxing, the trio of Herring, Berchelt and Ito were all complimentary of one another throughout fight week as well as in the aftermath.

“I congratulate Jamel Herring on a terrific win,” Berchelt (36-1, 32KOs) told BoxingScene.com. “I look forward to fighting him for our two titles in the future.”

Not since Marco Antonio Barrera’s 12-round win over Robbie Peden in Sept. 2015 has there been a unified super featherweight titlist. The closest that the division has come is on the rare occasion when the World Boxing Association (WBA) stages title consolidation clashes between its “Super”, “Regular” and “Interim” beltholders.

Two more significant divisional stakeholders—Gervonta Davis and Tevin Farmer—have spent more than two years going back and forth through social media, but have never grown any closer to an actual fight than since their silly beef began. Davis is a two-time titlist in the division, while Farmer picked up a strap just last August.

Herring hasn’t even yet fully absorbed the words “…AND THE NEW!” but is already willing to cut straight to the chase—especially since his next potential foe thought enough of him to travel from Mexico to take in a night at the fights.

“That’s what I respect about Berchelt. He signed with Top Rank last year with the intention of unifying the title,” notes Herring. “He has always aimed for the winner of this fight, and was very respectful to me before and after.

“We both understand that we have what the other wants and I respect that he wants to unify and made the moves to put himself in that position.”

Jake Donovan is a senior write for BoxingScene.com. Twitter: @JakeNDaBox

Good shet Herring . He was kinda iffy when asked about unifying with Berchelt right after his win over Ito . Good to hear he's willing to Unify .