Heather Hardy: We Have To Keep Fighting For Equality in Boxing 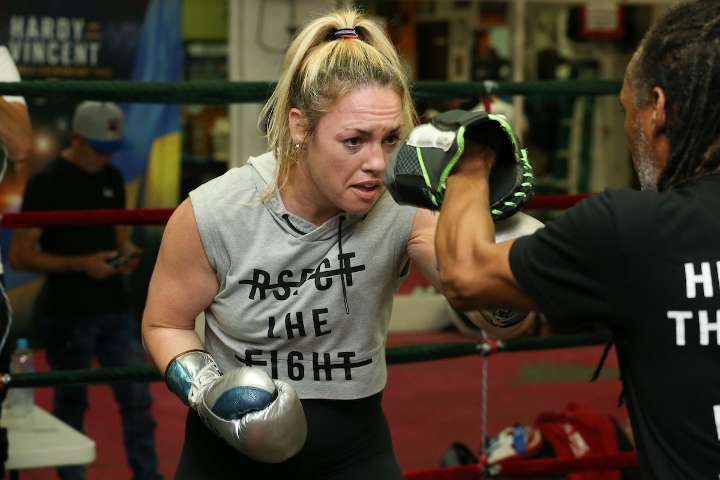 Below are Heather Hardy quotes from the media workout:

"Training for this fight has gone very well. I have never had so much time to prepare for a bout so it's been a really fun, challenging camp."

"There's always a lot of hype going into a rematch, particularly when the first fight was so action-packed. I've transformed as a fighter in the past two years, grown out of a lot of bad habits and gotten much stronger after my crossover to mixed martial arts."

"I've spent my entire career advocating for more opportunities for women in the sport, so to be given the opportunity to fight for a WBO world title at Madison Square Garden and on HBO is really a dream come true. It speaks volumes to how hard work, dedication and persistence pays off."

"There's been a significant growth in women's boxing since 2016 when Claressa won her second gold medal at the Olympics. Outside of Lou DiBella who has always been an advocate for women in boxing, we've seen more promoters start to sign and showcase women and give them airtime on multiple platforms."

"It's hard to believe that it was 2012 before women were even allowed to box in the Olympics, so while its incredible to see the growth in the sport since then, we have to acknowledge that there's still a long way to go. Women's boxing is still in its infancy. Until the weight classes for women are expanded in the Olympics, with only three right now compared to 12 for men, the pay gap is closed. Until the airtime is distributed equally based on talent and not gender, we have to keep fighting. No freedom till we're equal."

Ronda rousy cleared this up, bring the numbers in and you get paid. This is black and white, she should appeal to her “sisters” to come out and support her/them

Heather you seem like a hard working honest integral lady and i support anyone who try's and works hard but womens boxing is only worth what it's worth.. The depth isn't there , in each female weight division there are…

Womens Boxing is horrible & will always be horrible

She never watched Nicola Adams's last fiight. If they put her and Lawrence Okolie on the same bill that would be quite something. It would crash the entire matrix, if I've done my sums correctly. Terrifying.

Why isn't there a little people boxing league? Why are they not paid equally to men's boxing? Why does this **** and all these other ****s think they should make as much as someone else even though they aren't bringing…