Coney Island, New York - Featherweights Heather Hardy and Shelly Vincent weren't just fighting for the WBC international women's title and to settle their long rivalry in the ring on Sunday in Coney Island. As the first women's fight to air on NBCSN, it was a pivotal bout for the sport, and both delivered for themselves and their peers with a memorable ten rounder that should let all network executives know that it's time to see more of the ladies.

There was no shortage of action in the opening round, Vincent settling into the role of aggressor, but Hardy easily playing matador as she fired off accurate shots that had the crowd roaring. 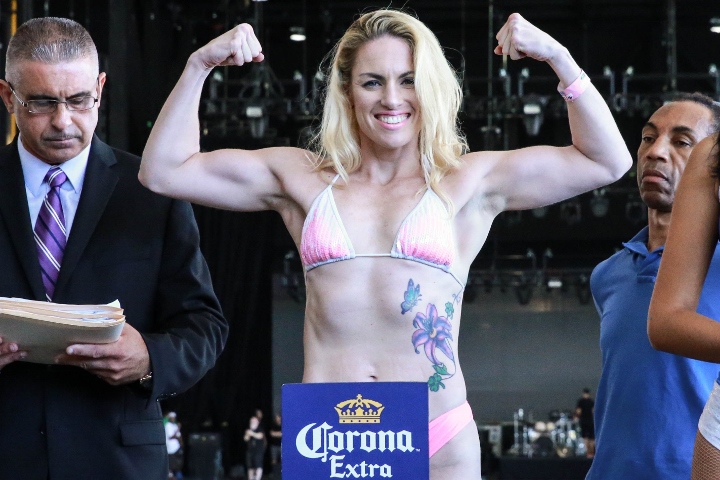 Early in round two, Hardy landed a hard left hook that got Vincent's attention, but the Rhode Island product kept coming, kicking off several heated exchanges at close range. In these firefights, Vincent was holding the upper hand, but as soon as Hardy got some space, her accuracy ruled the day.

Hardy continued to fight Vincent's fight in the third, but despite giving up her height and reach advantages, she was starting to have more success on the inside. The Brooklynite did get back to more boxing in the fourth, and Vincent was having trouble dodging the right hand of 'The Heat' By the end of the round, the crowd was battling with chants for their favorite, and Vincent rallied, landing some hard shots before the bell.

Remarkably, the pace remained frantic in round five, and Vincent broke open a close round with a relentless attack along the ropes until a late surge from Hardy.

The bout settled into a more sedate groove in the sixth stanza, a pace that suited Hardy, but that didn't stop Vincent from marching forward in order to entice Hardy into a brawl again.

Vincent's pressure and body work kept Hardy from pulling away in round seven, and the New Englander was clearly the fresher fighter in the eighth. But in the ninth frame, Hardy got a second wind, and she was able to box and move effectively, avoiding the rushes of her opponent as she fired off potshots from a distance. At the end of the round, the two rivals tapped gloves, clearly respectful of each other?s efforts.

After another touch of gloves to begin the tenth and final round, a brawl broke out once more, neither willing to give an inch of ground to the other. The crowd loved it, and rightfully so.

Great, great fight. Those women are warriors just as much as any dude.

Good fight. They were really landing some great blows on each other

I hear it was close, could have gone either way