Amanda Serrano might not be any closer to a promised superfight versus World lightweight champion Katie Taylor but at least can look forward to a notable next ring adventure in her immediate future.

The record-breaking seven-division titlist and highly-rated pound-for-pound entrant is in advanced talks for a shot at reigning featherweight title claimant Heather Hardy, BoxingScene.com has learned. The all-Brooklyn showdown—which was first revealed by Yahoo! senior combat sports writer Kevin Iole—is targeted for either September or October, to be carried live on sports streaming service DAZN.

Both boxers are promoted by Lou DiBella, normally one of boxing’s most outspoken personalities but whom was a man of few words regarding this long-awaited showdown.

“Yes,” was all that DiBella would offer to BoxingScene.com when asked to validate the reality of such a fight taking place. 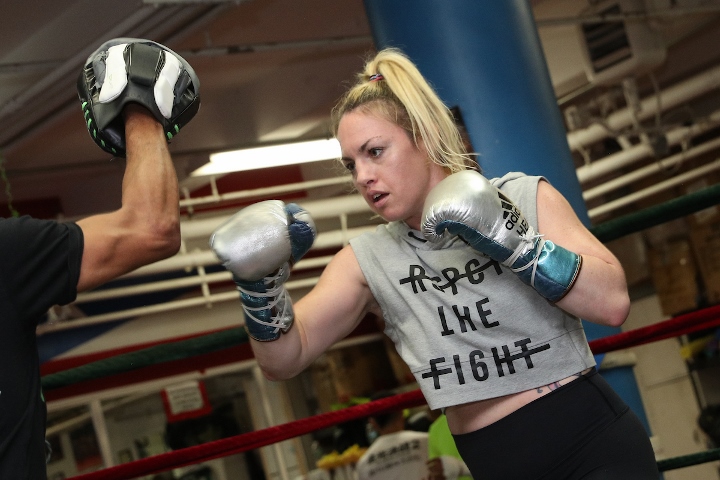 Serrano (36-1-1, 27KOs) began 2019 of the belief that three fights would come of the year, the last of which would be a blockbuster clash with Ireland’s Taylor. So read the agreement she holds with DAZN, which to date has only produced one fight—a 1st round knockout of Eva Voraberger in their vacant super flyweight title fight this past January.

The 35 seconds of work helped Serrano extend her own record on the female side of the sport, collecting a major title in her seventh weight division. Four such title claims have come in her last seven starts, with her four most recent bouts coming in as many different weight classes spanning 25 pounds.

Serrano—from Brooklyn by way of Carolina, Puerto Rico—has been on the shelf since her win over Voraberger, although the 30-year old southpaw was blessed with the honor of being named Female Athlete of the Year at this year’s annual National Puerto Rican Day Parade in New York City.

Holding her back from a second fight—never mind the third in the form of a crack at Taylor—was a dispute over her negotiated pay for each fight under her present contract. The matter has since been resolved internally, and with her next fight helping alleviate any criticism of her otherwise historic title run.

As many have been quick to point out the number of vacant titles Serrano has claimed along the way, she will face a defending champ for her next fight. Hardy (22-0, 4KOs) won a vacant featherweight belt in a 10-round win over Shelly Vincent in their rematch last October in New York City.

The 37-year old Brooklynite has been an outspoken critic in gender inequality when it comes to female boxers receiving compensation for their in-ring efforts. Both Hardy and Serrano have taken to the mixed martial arts world to further extend their combat sports careers, often finding greater respect on that side of the street than in boxing.

Still, it’s in the ring where Hardy remains perfect as a pro. Her latest MMA adventure resulted in a shocking 1st round loss this past June at Madison Square Garden, where she brought in a healthy crowd for her preliminary bout.

The setback was taken in stride, and with even better news of the biggest fight of her boxing career now on tap.

A win by Serrano will give her a second tour as a featherweight titlist, coming at a weight where by her own past claims she feels to be at her best.

Serrano’s previous reign lasted all of five months and covering barely 3 ½ minutes between two fights. A 1st round knockout of Olivia Gerula earned her the 126-pound strap in Feb. 2016, defending the crown with a 101-second stoppage of Calista Silgado later that July, with a non-title fight knockout win over then-unbeaten Edina Kiss (whom Hardy has since twice defeated) wedged in between.

Should she conquer Hardy, the latest title win should lead to a showdown with Taylor (14-0, 6KOs), who became the undisputed lightweight champion with a hard-fought albeit disputed majority decision win over Delfine Persoon this past June at Madison Square Garden.

Taylor is due to take at least one more fight in between, though without any real timetable or even weight class yet established for the 2012 Olympic Gold medalist and two-time Olympian from Ireland. Rumors have swirled of a move up the scale in a bid to become a two-division champ.

At whatever weight she lands, history has already shown that Serrano will be physically ready to meet her—unless of course Hardy has something to say about it first.

not much to talk about other than hardy is going to get smoked. too square and throws wide, looping hooks like keith thurman vs serrano throw crisp tight combos and straight punches. hopefully hardy gets good payday b/c serrano is…

As usual the build up will be shoved in our face embarrassingly 24:7 and the fight will be a mismatch .

I would watch, but I aint ordering DAZN

This is a sexy match inside and outside of the ring. I love me some Amanda Serrano, she a Puerto Rican ass kickin goddess. And Heather Hardy a cute ass snow bunny. I’d definitely watch this one

Hopefully Heather can finally get a decent pay day. Katie can't be thinking about anything other than the Persoon rematch.