Last week, Hearn announced that a date of December 7th had been finalized for a Joshua vs. Ruiz rematch, with the second bout taking place at the unexpected location of Saudi Arabia.

Hearn held a press conference earlier this week, to officially announce the fight. 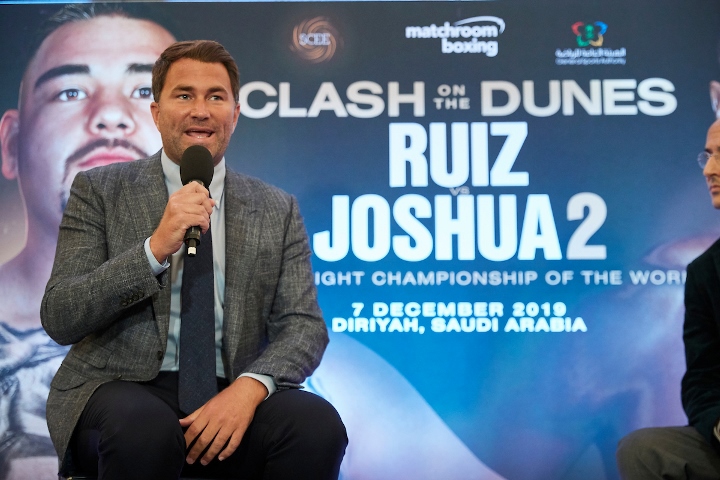 Ruiz stopped Joshua in seven rounds back in June at Madison Square Garden in New York City. Joshua went down four times in the fight.

But Ruiz is not in agreement with Hearn's announcement, taking to social media to advise the public that a rematch will be done on "my terms" and "in the United States."

Hearn is warning, that a legal battle will erupt if Ruiz backtracks on the rematch agreement that both sides signed back in May - prior to the first bout.

"The contract for the rematch was signed prior to the first fight," Hearn told Sky Sports. "They are both signed at the same time. There is no other contract.

"We have to let [Ruiz Jr] know the time, date and venue which we have done. That's it. They are contractually bound for the rematch. There are no conversations between the two teams about not doing the fight. I don't perceive a problem. He signed a contract with us that he was absolutely over the moon with, that gave him the opportunity of a lifetime. He will 100 per cent honour that contract.

"His choice is to have a legal battle that could put him out of boxing for years, or to defend his belts for a lot of money against a guy he has already beaten. There isn't any doubt he will take the fight.

"Any messing around and Ruiz Jr will lose belts, and he won't want to do that. We expect the IBF, WBA and WBO belts to be on the line. There are mandatories due but, in our opinion, Ruiz Jr is within his rights to have a voluntary defence. That defence is against Anthony Joshua."

[QUOTE=REDEEMER;19992978]That's a lie. Kownacki isn't known to be available with the current time line of this fight. Ithas nothing to do with a current agreed to title fight with the IBF's mando Pulev which is able to replace Ruiz if…

[QUOTE=REDEEMER;19993268]If Ruiz gets stripped he will be out of a title fight and THE ENTIRE FIGHT WILL BE REPLACED WITH THE 2 HIGHEST RANKED WILLING CONTENDERS. Ha[/QUOTE] there. Fixed it for you. Ha

[QUOTE=OnePunch;19993215]you remind me of my nephew when he sticks his fingers in his ears and says "lalalalalalalalala I cant hear you!!!!". Believe what you want. If Ruiz gets stripped you will see firsthand what happens. There is no point in…

[QUOTE=OnePunch;19993215]you remind me of my nephew when he sticks his fingers in his ears and says "lalalalalalalalala I cant hear you!!!!". Believe what you want. If Ruiz gets stripped you will see firsthand what happens. There is no point in…

[QUOTE=REDEEMER;19992764]Well you just posted it ….one fighter failing to participate already in a losing purse bid and sanctioned fight is right here,,,,[B] so therefor AJ has to still be in the event .[/B] You did nothing but paste empty schedules…