Hearn: They Wrote Joshua Off - Now He's The Division's Governor!

It was professional and executed in a cool and calm fashion. It was Anthony Joshua regaining his world heavyweight titles. But, let’s not get carried away with the 36 minutes of brilliant boxing the world witnessed in the Middle East. Despite gaining his revenge, this was a different and more vulnerable version of Anthony Joshua.

In no way, shape or form did Joshua fail on Saturday night. He boxed beautifully on the back foot and did what any fighter with a height and reach advantage would do against a smaller opponent - that can’t be denied. He controlled the bout from start to finish, but it just felt that if Ruiz Jr. was to land anything of note, it would be a repeat of June 1st all over again. The fact is that he didn’t and the record books show him to now be two-time world heavyweight champion.

“It was an absolute masterclass. He was able to stay disciplined. People have doubted his boxing ability, his endurance. He was humiliated at Madison Square Garden. It was the American coming out party and it was ruined. He could have brushed himself down and went off. Instead he came back and put on that performance and it was beautiful. That’s the sweet science. That was like Picasso on a canvas, paining a masterpiece," stated Joshua's promoter Eddie Hearn. 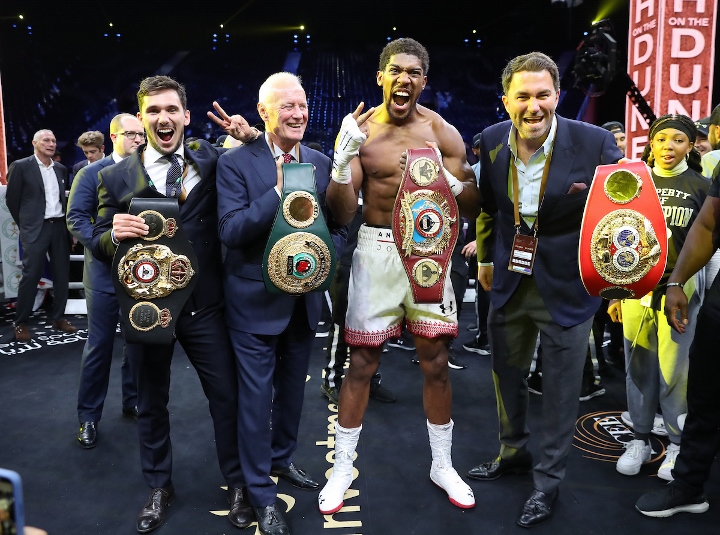 His performance was similar to that of Luis Ortiz just a fortnight ago. That went to plan until Deontay Wilder unleashed a right-hand that scrambled the Cuban’s senses. If Wilder detonated one of those bombs on AJ - would he survive it?

After crushing all that dared to challenge him between 2013-2018, this doesn’t look or feel like the same fighter. Kudos to him for finding a way to regain his titles. He did what he needed to do. I just ponder where he goes and what happens next?

“They wrote him off. They said he was all hype. He had to come back from humiliation at Madison Square Garden. Tonight, he is the governor. The governor of the division," Hearn said.

24 hours after the weigh-in, I’m still flabbergasted at Ruiz Jr. weighing-in heavier than he did on June 1st. Speed was AJ’s kryptonite that night and adding weight seemed to counteract the advantage he already held. He was either hampered by any injury or the amount of zeroes in his bank account. Claims for a trilogy fight by the Mexican-American carry little weight!

It’s likely that mandatory title defences will scupper any chances of an Undisputed world heavyweight title fight in the immediate future, so for now, AJ can take time to concentrate on building back some of the intimidation factor that he possessed prior to that infamous night at Madison Square Garden. Some of his opponents were beaten before they even dared step foot inside the ring. That mentality seems to be gone, for now.

The American sub-humans are once again proving how deranged, creepy and detached from reality they are on this thread. Holy shlt is it scary to read. They are of satan. They are truly evil and demonic. F5cking freaks.

AJ is the only top HW who can adapt, and adaptability is what differentiates the elite from the rest.

congrats to aj but this victory in no shape erases the azz whoopin, ruiz was terribly out of shape; lets keep things in perspective, all this talk of everyone has to come to the uk and wilder wont be recognized…

This is their time again, they've taken a lot of criticism so I can't fault them for enjoying their moment in the moment

Pulev fight is awful. He needs to fight someone in there prime under 35, preferable someone of similar size to AJ, and under 20 stone.