Eddie Hearn says he has a binding contract for Amanda Serrano to fight Katie Taylor on August 22, despite claims from Serrano’s manager that the fight would not go ahead.

Hearn wants to stage the fight – for Taylor’s undisputed world lightweight title - on the final Fight Camp show at his Matchroom company headquarters in Essex, on the same bill as the heavyweight clash between Dillian Whyte and Alexander Povetkin.

But he stopped short of naming Serrano when the cards were unveiled on Friday and says he has made an offer to former WBC champion Delfine Persoon in case Serrano – the seven-division champion from Puerto Rico - refuses to fight. Persoon lost a hotly-disputed decision to Taylor in New York last summer. 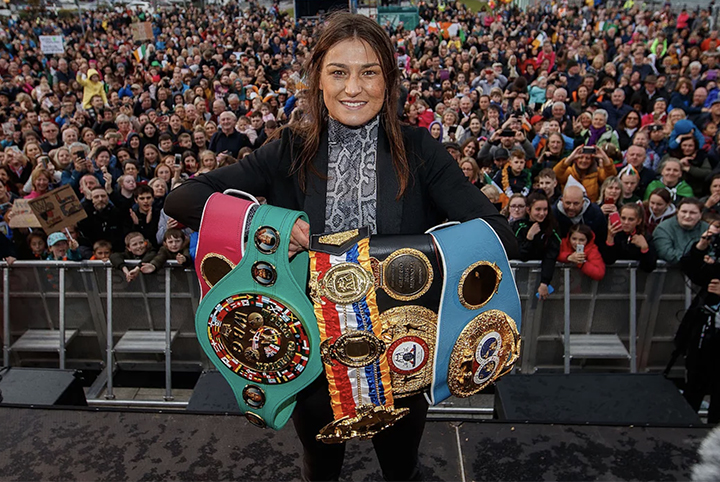 The Taylor-Serrano fight was originally schedule for May in Manchester but was pushed back because of the coronavirus pandemic and will now be staged in front of no paying spectators.

“We have a signed and binding contract with Amanda Serrano to fight Katie Taylor,” Hearn said.

“She was in for May 22 and we hoped we might be able to reschedule it by July.”

Jordan Maldonado, Serrano’s manager, said she had been offered a 50 per cent cut in her purse, but Hearn insisted that was not that case.

“There were all kinds of rumours that she had been offered reduced purses, but we never made Lou DiBella [Serrano’s promoter] one offer of a reduced purse for this fight,” Hearn said.

“Last week we wrote to them and said August 22 is the date for the fight. There have been a few rumblings in the camp and we have told her she is under contract – ‘we have a binding contract that you have signed personally for this fight’. There is no smaller purse, there is no controversy over what is happening. We expect her to accept the fight.

“I have also reached out to Delfine Persoon, made them a couple of offers yesterday, which I think would make a great replacement fight. She has a mandatory with Miriam Gutierrez, from Spain, the mandatory for the WBA interim title, who is 13-0. But Serrano is the fight we want and we will do everything we can to enforce out legal rights around that fight.”

I said before Serrano is not going to fight Taylor she has too much to lose! I do want to see the champ take it to Parsoon and school her so to shut up the irish haters!! Although it would…

[QUOTE=Monty Fisto;20632019]Personally, I think a rematch with Persoon is at least as compelling a match-up.[/QUOTE] I'd rather see that, too, first, before she fights Serrano. I'm a big Taylor fan and I'm confident she'll whip Persoon's ass even better this…

[QUOTE=Monty Fisto;20632019]Personally, I think a rematch with Persoon is at least as compelling a match-up.[/QUOTE] I agree, Katie Taylor needs a rematch with Delfine Persoon to redeem herself. The world seen Taylor get whooped and nearly KO, in NY.

Personally, I think a rematch with Persoon is at least as compelling a match-up.

[QUOTE=Oldskoolg;20631511]Lol this guy Hearn lol. So this proposed “American takeover” has now been relegated to fights in Hearn’s veranda?[/QUOTE] You've got to be pretty one-eyed to ignore what has happened with coronavirus.