Eddie Hearn thinks the viewership figures from Top Rank’s ESPN shows in June are bad for the boxing business overall.

The British promoter pointed to the level of fights Top Rank has put together the past three weeks as the primary reason more viewers haven’t watched consistently. The first of six Top Rank cards ESPN has aired on weeknights since June 9 from Las Vegas drew the highest viewership, a peak audience of 609,000 during Shakur Stevenson’s sixth-round knockout of Felix Caraballo in the main event and an average audience of 397,000.

ESPN’s following five weeknight broadcasts each drew lower peak and average viewership than the Stevenson-Caraballo card. That’s troublesome, according to what Hearn stated during a recent appearance on “The Ak And Barak Show,” which streams daily on DAZN and SiriusXM.

“You’re seeing a little bit of boxing back right now,” Hearn said. “The content is not good enough. And you’re seeing that being reflected in the ratings. You know, Top Rank and ESPN shows are running non-competitive fights and a lot of the times with fighters that don’t have significant profiles. You’ve only gotta look at the ratings that are being produced by ESPN and Top Rank – it’s horrible for the sport. It’s giving people an excuse to say, ‘Boxing’s dead!’ Boxing’s not dead, when you get the product right. And when we come back, we’ve gotta make sure we get the product right.” 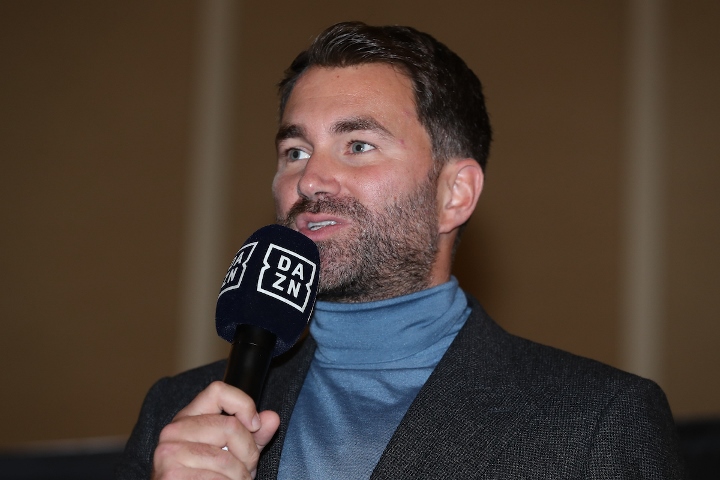 Stevenson (14-0, 8 KOs), the Newark, New Jersey, native who owns the WBO featherweight title, was listed as a 100-1 favorite to beat Puerto Rico’s Caraballo (13-2-2, 9 KOs) in what was a steep leap in class for the unknown underdog.

Two of Top Rank’s other five main events were competitive, compelling fights that resulted in upsets, though.

Promoter Bob Arum told BoxingScene.com recently that Nielsen Media Research’s viewership figures for Top Rank’s ESPN shows in June are deceptively lower than some might’ve expected because viewers from ESPN Deportes aren’t counted among Nielsen’s totals and less bars and restaurants are open in the United States during the COVID-19 pandemic, which results in fewer viewers of ESPN. Arum also noted that it has been difficult to make more competitive bouts due to budget and travel restrictions, as well as availability among fighters who haven’t been able to train properly.

Maintaining audiences for three-hour and four-hour telecasts also has been challenging for ESPN because the network is airing Top Rank’s entire cards. Some of those dull undercard encounters haven’t included even one contender or prospect.

Hearn conceded that there are more matchmaking issues during the pandemic, yet he still feels Top Rank and ESPN should be offering better boxing. Hearn believes his company, Matchroom Boxing, has put together more evenly matched, intriguing fights for its upcoming “Fight Camp” series on Sky Sports, which was announced Friday (https://www.boxingscene.com/matchroom-fight-camp-begins-on-august-1-whyte-povetkin-on-august-22--149780).

“My thoughts are that you can’t have A-level guys against A-level guys at the moment, with no gate,” Hearn said. “Financially, it’s impossible. But what you’ve got to have is you’ve got to have your B-level guys against your B-level guys, your C-level guys against your C-level guys. And if you manage to throw in an A-level guy, at least make him against a B-level guy. And what you saw in your first show – and by the way, this isn’t just a problem for Top Rank, because it’s very difficult. You know, on one hand, you wanna get Shakur Stevenson out, right? Because he’s a good talent, could be a big future Hall-of-Famer even. But you haven’t got a budget to give him a decent opponent. So, you don’t even get him an A, B or C. You get him a D or an E, no disrespect to the opponent.

“But all of a sudden, you’ve got a one-sided fight, with no fans in the arena, no atmosphere. How do you think that’s gonna translate as a TV product? The answer? Poorly. So, one, you’ve gotta try and build this vision of a show, and that’s why we’re doing our stuff outdoors [on the grounds of Matchroom’s headquarters], just something completely different. But secondly, the fans right now, I don’t even feel like the fans are expecting a great deal. Just give ‘em great fights. That’s it, you know? And I think that’s what we’re gonna be trying to do.”

I can't fully agree with Eddie. In my opinion, it's a good thing for ESPN to put on boxing shows....regardless of the opponent(s). Weren't we dealing with the same mismatch stuff pre-COVID? At this point, I'm just happy boxing has…

[QUOTE=sicko;20635916]Yeah I agree with Eddie but this is not a Top Rank/ESPN issue this is a BOXING ISSUE in general here in America The Appeal of the sport is at a All Time Low to the point in which I…

I tell you what....the fights arnt even that exciting for boxing fans and surely won’t hold casual interest. Boxers have gotten to a point where they fight to not lose rather than fight to win. I really am starting to…

yeah - it returned with one of the most unlikeable pissants in the whole sport shakira slapenston five minutes in,yet [I]another[/I] lecture from espn announcers about race. is it any wonder

[QUOTE=Get em up;20635406]That's the reality there. At least Top Rank is doing something it's real easy to criticize when Bob is the only one trying. I'm honestly just glad to see a live fight.[/QUOTE] The feeling is mutual