NEW YORK – The third bout between Canelo Alvarez and Gennadiy Golovkin obviously is the biggest fight DAZN can stream by the end of this summer.

In its own way, though, Eddie Hearn considers Jose Ramirez-Maurice Hooker to be an extremely important fight for the fledgling streaming service. 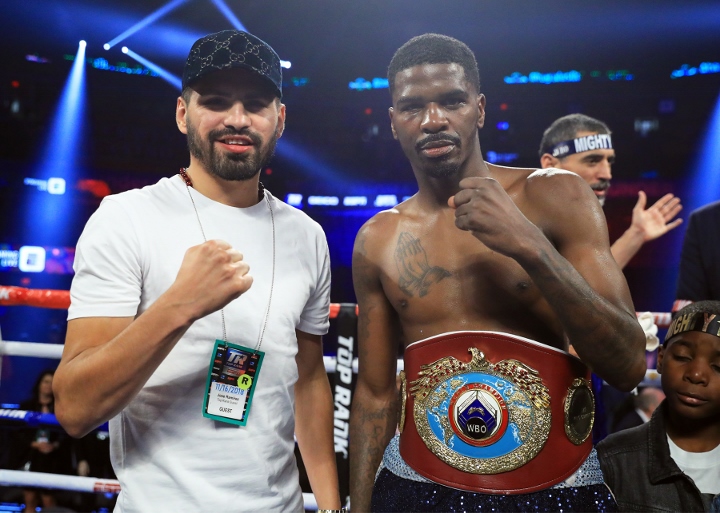 “It’s groundbreaking for business that Matchroom and Top Rank – Top Rank is sending a fighter to DAZN and we’re sending a fighter to ESPN,” Hearn told BoxingScene.com on Saturday. “And the same with the PBC. It hasn’t happened yet, but in time I’m sure it will. So, great news for fans, because it is, for me, one of the fights of the year. Brilliant fight for the division, great fight stylistically. And we wanna keep creating sort of key moments every month for DAZN.

“So, you just had Jacobs-Canelo in May. In June, you had Joshua-Ruiz and Triple-G tonight. And you’ve also got Andrade-Sulecki at the end of June. Next month, July, you’ve now got Maurice Hooker-Jose Ramirez, unification fight. August, you’ll have a big show. September, Canelo. So, you’re almost getting like sometimes a pay-per-view moment every month for $99 a year. But it’s just a case of exposure and spreading the word, and that word is spreading rapidly.”

“Well, I’m trying to change the perception of boxing a little bit,” Hearn said. “The things that the fans hate is the network politics, the promoter politics. So, we’re trying to go some way to make that happen. For the Crolla-Lomachenko fight, that was a purse bid, where we almost said – we could’ve bid for that fight, you know, and put it on DAZN. But, ‘OK, you made us a good deal. We don’t wanna be a problem.’ Now same with Luke Campbell against Lomachenko, probably a fight that’ll end up on ESPN. This is an opportunity where I said, ‘OK, here’s a monster offer for Jose Ramirez.’ And they were like, ‘OK.’ [I said], ‘We’ve done some on yours [ESPN]. I would like to do this on DAZN.’

“It ultimately comes down to the network. They would have to go to ESPN and say, ‘We have a great offer for our fighter. I think it’s a great opportunity for him. Is that OK?’ And we have to do the same with DAZN. But we’re trying to break the mold. If they would’ve offered me the package that Ramirez is getting, I would’ve accepted this fight on ESPN. So, you have to look out for the fighter. You can’t keep blocking fighters’ progress because it doesn’t suit your business. That’s not acting in the best interest of the fighter. So, Ramirez really wanted this fight. The numbers came in that suited everybody, and it was on.”

I like DAZN. They're slowly taking over the sport of boxing. They continue to add more sports categories. ESPN and FOX and any major sport network need to worry.

What’s groundbreaking about this?

[QUOTE=TinAgeOfBoxing;19819207]AJ Povetkin and AJ Ruiz are the only 2 fights worth paying for so far.[/QUOTE] Not a boxing fan then. DAZN's LA card was sensational.

I noticed DAZN have deleted the AJ vs Ruiz highlights from their YouTube channel so as far as I'm concerned DAZN can eat a dick and choke on it.

AJ Povetkin and AJ Ruiz are the only 2 fights worth paying for so far.