Promoter Eddie Hearn is pushing to have Dillian Whyte to become the mandatory challenger to WBC heavyweight champion Deontay Wilder.

Whyte, who is ranked at number one by the WBC, is scheduled to face Oscar Rivas at The O2 on July 20, live on Sky Sports Box Office.

Hearn is looking to have that contest become a WBC final eliminator, with the interim-heavyweight title at stake. 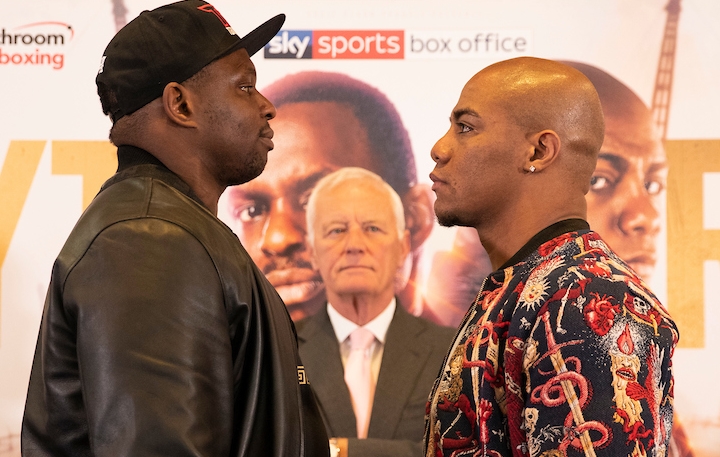 Wilder will be facing mandatory challenger Dominic Breazeale on May 18th at Barclays Center in Brooklyn, New York.

Hearn believes his boxer got stepped over in favor Breazeale.

"Everything that he's done in that division, all the defences of his WBC 'silver' title, a couple of world title eliminators, and him ranked No 1 for god knows how long, and yet someone who is ranked four or five becomes the mandatory," Hearn told Sky Sports.

"We're pushing hard for a resolution, and we want the Oscar Rivas fight to be for the mandatory position with the WBC and for that interim world title. We'll see where that goes. We're all trying to come up with a resolution that's fair and we haven't yet, so we're still pushing. We want the Rivas fight to be for something very significant for the WBC and that's probably an interim world title fight and to become mandatory for the winner of Deontay Wilder against Dominic Breazeale."

Whyte is also ranked in the top spot by the WBO, but Hearn expects Oleksandr Usyk to be names as their next mandatory challenger to WBO champion Anthony Joshua.

I watched last 3 Dillian fights and last 3 Breazeale fights last night. Whyte caught a good break with fury vs wilder falling through. Whyte vs Breazeale was a 50/50 fight. They both lost to Joshua in 7 rounds. That…

Just seen the link below; Hearn and Whyte are not getting what they want straight away, but Fury vs Whyte towards the end of this year would go some way towards clearing up the arguments about rankings and mandatory challengers…

Even if it gets made a final eliminator, Whyte still won't get his shot. When the time comes for that mandatory to be fulfilled, Wilder will finally sign on to fight Joshua in a double-header.

[QUOTE=Bonduu;19727494]What has old man Ortiz done to deserve a top spot contention again??? Why didn’t he fight AJ for 6m? Ortiz is a bum and a duck, he has high blood pressure and can’t last 6 rounds of pressure boxing,…

And he'll have to wait another year before he gets his shot. Just like Wilder told him