Hearn: Povetkin is Tougher Fight Than People Think For Joshua

ANTHONY JOSHUA'S promoter Eddie Hearn has revealed he has concerns about his fighter ahead of his bout with Alexander Povetkin.

Joshua is preparing to defend his WBA, WBO, IBF and IBO heavyweight belts at Wembley Stadium on September 22.

He goes into the fight following an impressive win over Joseph Parker back in March, which saw the pair go the distance. 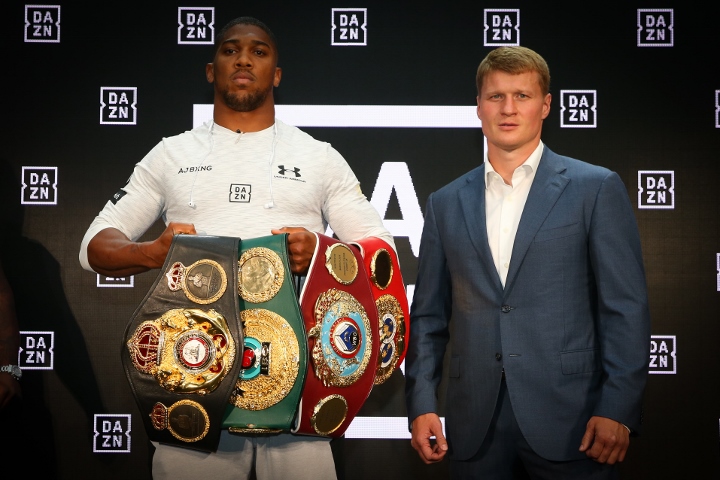 The Watford-born scrapper has undergone one of his longest training camps in preparation to step back in the ring.

But Eddie Hearn is still concerned there could be an upset.

"I'm nervous because everyone is expecting AJ to win and I don't think people realise how hard this fight is," he told Hayters TV.

"The independent rankings have Povetkin third in the world, it's a tough fight and we're taking it seriously.

"It's a shame for AJ because he might not get the credit he deserves.

"But people in boxing and people who follow the sport know about the quality, strength and danger of Povetkin."

Many fans were hoping Joshua would face Deontay Wilder if he wins on next weekend.

But a fight between the WBC belt holder and Tyson Fury now looks more likely.

The Gypsy King uploaded footage to his Instagram yesterday, where he called out the Bronze Bomber.

“We’re pumped to bring more and more fight action to Canadian fans,” said Joe Markowski, SVP, DAZN North America. “We love the enthusiasm we see from the fans and our goal is continue delivering content they want to watch.This is just the beginning.”

[QUOTE=Oshio;19097285]I still insist that Povetkin has a better resume than Wilder[/QUOTE] It's simply the truth, and anyone who thinks this is an easy fight will be in for a big surprise.

Hearn talking out of his ass to try and hype the fight. There is no way Hearn would take any fight that would be risky for Joshua at this point unless he has made financial arrangements that take the risk…

I finally agree with this con artist because AJoke has a glass chin!!!!!!