Hearn: Paul-KSI is One-Off, Not Looking Into Celebrity Matches

Boxing is a business, and there’s perhaps no one better at realizing this of late better than Matchroom head Eddie Hearn, a trailblazer of sorts in the sport based on the series of moves he’s been able to pull off recently.

Some of the feathers in his cap include: the eight year, $1 billion deal he struck with DAZN and the subsequent stars he signed to promotional pacts, scoring a hefty site fee north of $40 million for the Andy Ruiz-Antony Joshua rematch to take place in Saudi Arabia and being first-to-market with a mega fight in the middle east, and tapping into promoting the rematch between YouTubers in Logan Paul and KSI on Nov. 9 at the Staples Center in Los Angeles and streamed on DAZN.

Although Hearn plans to host more fights in Saudi Arabia moving forward, the same cannot be said for making fights for famous faces outside of boxing who want to step into the squared circle for reasons related to spectacle rather than sport.

“The Logan Paul versus KSI fight is a one-off. I’m not looking to do celebrity matches,” Hearn told BoxingScene.com. “Since we’ve announced this fight, I can’t begin to tell you how many singers, football players and YouTubers have gotten in touch wanting to get on this card. From a charity perspective, that’s fine. We made this a professional fight because I wanted to make sure they both understood the code of the sport.” 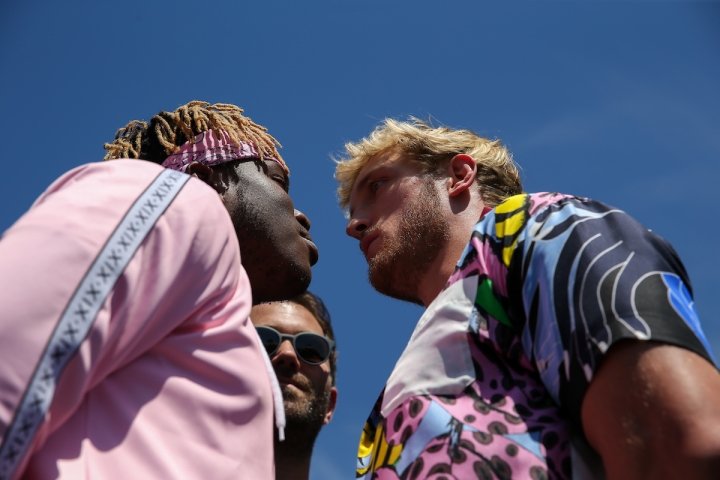 Hearn said he took charge on the rematch after passing on promoting the first installment because of the crossover opportunities it presented. The pay-per-view stream for the first match, a majority draw, cost $10 and there were 1.2 million buys. The white collar amateur match also sold out the Manchester Arena in England with over 15,000 seats. Hearn said he wanted to legitimize the six-round affair by making it a professional fight with 10 ounce gloves and no head gear.

“The first fight was a decent one so I had to look closer at this,” said Hearn. “I’m interested to see if they can expand the sport and capture a new audience. People say that whoever jumps on board will not stay. Well, that’s our job to make them stay.

“We need to showcase ourselves to the Gen Z audience. It’s very difficult to attract them via contemporaries methods. These fighters will be bringing built-in audiences and expose them to the elite fighters like Devin Haney and Billy Joe Saunders, who will also be on the show. You can’t not watch Devin Haney without going, ‘wow! He’s amazing! We’re going to follow him.’ His fan base will grow and more fans will come into the sport as a result.”

Although Hearn sees the fight as a singular event, the fighters have other intentions.

“They don’t see this as a one-off event,” said Joe Markowski, DAZN’s executive vice president of North America. “They want to be a part of a broader movement in the YouTube community, transferring their audiences into boxing. We can build out a new set of fans. That can only be a good thing for us, and for the sport.”

Markowski said that DAZN partners and fighters like Canelo Alvarez understand the crossover potential online celebrities present to the platform in gaining the interest and attention from a demographic of fans that couldn’t be reached before.

“We want to introduce Canelo to the audience Logan Paul has,” said Markowski. “Canelo understands it. He knows that. To a certain extent, real boxing does not automatically reach a 10-year-old kid.”

During an international conference call with reporters on Wednesday, Alvarez did not offer much sentiment to the fight that will follow the weekend after his showdown with Sergey Kovalev.

“The truth is I have no opinion,” said Alvarez. “I don't even know the people which you speak of, so I have nothing bad to opine about this. The sun rises for everyone.”

Hearn would promote dwarf Grandma boxing if it made ¢'s

[QUOTE=sayf;20139567]Nobody else seems to be thinking that this could actually be a bad thing for boxing of one of them gets badly injured. Can you imagine the pressure of one of these YouTube darlings gets a brain injury or worse…

Nobody else seems to be thinking that this could actually be a bad thing for boxing of one of them gets badly injured. Can you imagine the pressure of one of these YouTube darlings gets a brain injury or worse…

I watched a replay of the first fight the other day on DAZN - out of pure curiosity. It honestly wasn't half as bad as I was expecting, given that these guys are rank amateurs. Based on what I saw…

Lies. Does big numbers, next you'll see two rappers who are normally beefing getting showcased on DAZN with an unretiring Broner on the undercard.