Hearn on Whyte-Povetkin: The Most Important Heavyweight Fight in 2020

Eddie Hearn, promoter for Dillian Whyte, believes his boxer's upcoming clash with Alexander Povetkin is the most important heavyweight contest of 2020.

Whyte will stake his WBC mandatory status against Povetkin on Saturday night at Matchroom's Fight Camp in Brentwood.

Povetkin, an Olympic gold medal winner and former WBA champion, is likely in his final opportunity to put himself in line for a world title shot. 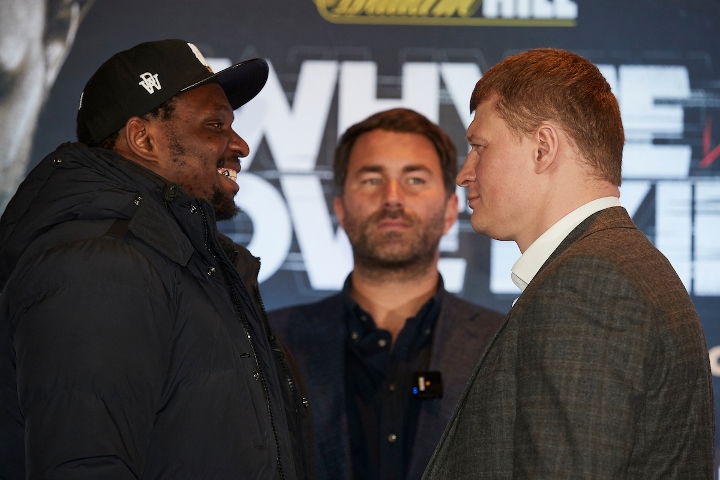 The winner of the fight will be in direct position to fight for the WBC heavyweight title.

If Whyte comes away with the win, then pursuant to a WBC order he will be due a mandatory title shot by February 2021.

The current WBC champion is Tyson Fury, who is contractually bound to face Deontay Wilder in a trilogy fight, which is targeted for December 19.

At their recent convention, the WBC sweetened the pot for Whyte-Povetkin - by sanctioning the fight for their "Diamond title."

"[The WBC Diamond title] is on the line for the first time. It’s still for the interim world heavyweight title, but also the Diamond belt. It’s the most important heavyweight fight this year by a mile. Alexander Povetkin can bowl in and become WBC mandatory just by winning this fight. Dillian Whyte has waited 1000 days. The winner of Fury against Wilder has to fight Dillian Whyte or Povetkin or vacate the belt," Hearn told IFL TV.

“So if Fury wants to vacate and Dillian Whyte fights #1 or #2 for the title, he can fight AJ for the undisputed."

[QUOTE=theface07;20713023]Why would Fury vacate? Let's see, maybe because then he would be able to go from beating Wilder a third time to fighting AJ. Fury has dropped the belts before. I don't think it's too far fetched to think he'd…

[QUOTE=Unidentified;20710759]Give us the best fight possible. Even if Fury throws the belt in the garbage, a fight between him and Joshua is the fight that determines who's the best heavyweight. "To be the man, you gotta beat the man." Fury…

[QUOTE=theface07;20713014]FUC_K The Eagles! What a bunch of pretentious ******* duschebags who make "soft" rock and adult contemporary music for elitist corporate clowns who think they are kicking back on the weekend listening to unoffensive ******* garbage like Hall & Oates,…

[QUOTE=Ray*;20710568]Why would Fury vacate? and if he does and Whyte beats Povetkin then lets see AJ - Whyte 2 for all the belts. But i doubt other promoters would want Whyte/Hearn to get their hands on that belt.[/QUOTE] Why would…