Hearn: KSI, Paul Are Not Very Good, They Think They Are Now

Promoter Eddie Hearn admits that he has not been pleased with some of the pre-fight antics from KSI and Logan Paul.

Hearn is staging a DAZN streamed card on Saturday night from the Staples Center in Los Angeles, where the two Youtube stars are going to collide in a six-round pro boxing match. 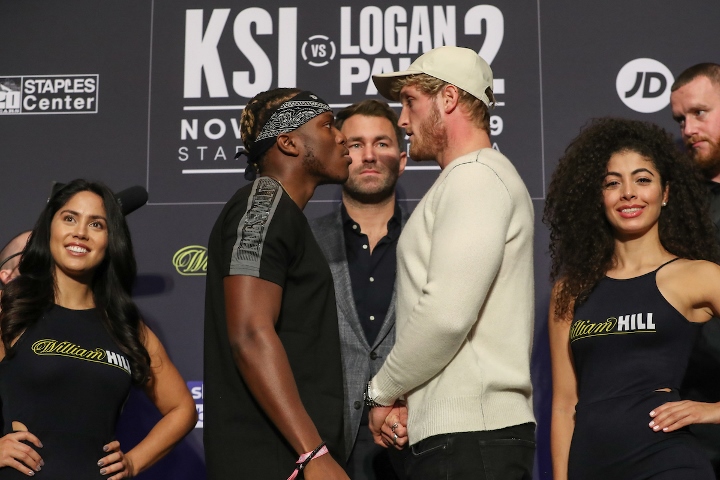 In the lead-up, both men have threatened to "kill" each other - which doesn't sit well with a lot of people, including Hearn. Several boxers have passed away in 2019, due to in-ring related injuries.

"They don’t know enough about boxing, they don’t really respect the game enough to think about what they are saying," Hearn told Boxing Social.

"Fighters say stuff like that all the time, no one ever means it, but I didn’t like it when that was said multiple times. But I’ve heard it this week, last week, the week before. I don’t think they know enough about the game to know they shouldn’t really be saying that, in my opinion."

There have been many critics of the contest, because it's being positioned in a headline spot while world champions Devin Haney and Billy Joe Saunders are slotted on the undercard.

It doesn't help matters that both KSI and Paul have respectively voiced their belief of being capable of beating actual pro boxers.

Hearn doesn't hold back when stating that both social media celebs are "not very good."

"I know they both really badly want to win, and they are both probably going to crack under the pressure. They’re both not very good - they think they are now. But the reality is when someone gets hit the world is going to change for them."

[QUOTE=_Rexy_;20179223]What kind of promoter signs two complete nobodies to a big money fight, then keeps talking about how awful they are?[/QUOTE] People will want to see how chit they are lol

What kind of promoter signs two complete nobodies to a big money fight, then keeps talking about how awful they are?

This garbage started when Kimbo slice became an internet sensation, we are living in bizarre times.