Eddie Hearn, promoter for Anthony Joshua, says his boxer must overcome any mental scars from the June TKO defeat at the hands of Andy Ruiz.

The rematch takes place on Saturday night on neutral ground in Saudi Arabia. 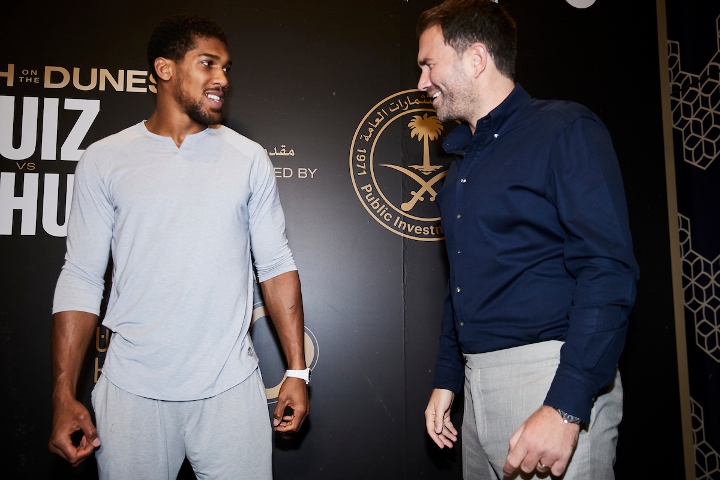 There are some promoters who felt Joshua should have taken a tuneup or two before an immediate rematch.

But Joshua wanted to avenge his first career defeat in rapid fashion. He turned back any talk of potentially going in the direction of a tuneup.

Joshua strongly believes his career will push forward, win or lose, in the rematch. There are some observers who feel the British superstar's career as an elite boxer is at stake in the fight.

"He's trained hard and is just tapering down now, probably getting his last sparring in," Hearn told Sky Sports.

"It took him a while to get over the defeat, he had to ask himself some questions, but the way he has bounced back is admirable. This isn't a guy shirking a challenge. It's not a guy asking for an easy warm-up fight. Time and time again, he has gone in at the deep end before his time, he's doing it again. A warm-up fight is not in Anthony Joshua's vocabulary.

"Creating a legacy has been the motivation and I believe he will win and when he does, it will be sweet. It's tough though, it's a 50/50 fight, he has to overcome that mental warfare of being stopped by Ruiz Jr last time out."

[QUOTE=doom_specialist;20227113]Joshua should fight Ruiz the way he fought Joseph Parker. He knows he can't trade with Ruiz, so he'll have to use his range. Ruiz didn't have any success until Joshua got overconfident, and Joshua knows that, so he'll be…

I feel Hearn and AJ are risking long term legacy for short term money.. AJ could've been like Chavez Jr and made great money fighting no-hopers.. is it cashing out? I'm not sure yet. He didnt really look great in…

I don't know who I'm going for this time. Neither fighter is from the U.S.! :stooges:

Let’s trust the man behind the Whyte b sample scandal. This whole event is as on the level on as the Saudi government.