New York - Eddie Hearn and Top Rank have come together for a few fights in recent memory. Earlier this year, they came together to co-promote the bout between Vasily Lomachencko (13-1, 10 KO's), who is with Top Rank, and Anthony Crolla (34-7-3, 13 KO's) who is with Hearn's Matchroom Sport.

And a few weeks they came together for the Maurice Hooker (26-1-3, 17 KO's) (who Hearn co-promotes) and Jose Ramirez (25-0, 17 KO's) who Top Rank handles. Ramirez unified two titles with a stoppage victory in their unification bout last month.

But in boxing, you can be best friends one day and enemies the next. 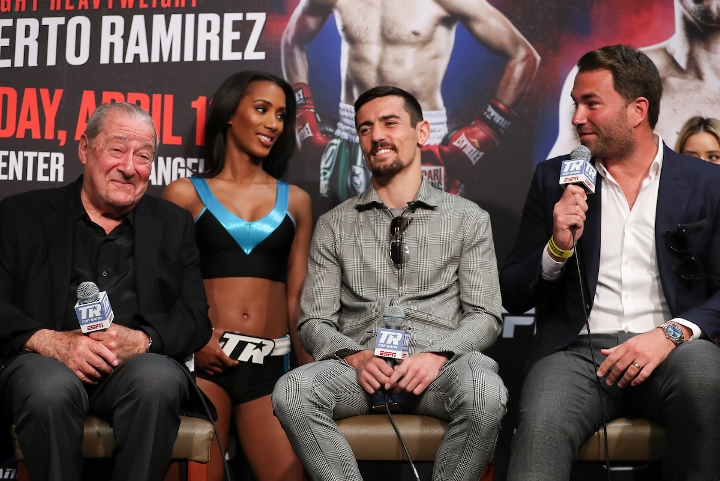 Top Rank's CEOB Bob Arum has been very outspoken on the subject of the Andy Ruiz-Anthony Joshua rematch, where the fight takes place, the money split, and even called Hearn "stupid" with respect to the way he handled the negotiations.

When talking to reporters at the Golovkin-Derevyanchenko kick-off presser New York, Hearn brushed off Arum's remarks.

"People are trying to cause problems," Hearn said. "You got Bob Arum who is so desperate for Andy Ruiz to end up in a court case with no money to lose IBF title... he said the US government said you can't go to Saudi Arabia, absolute rubbish. Bob Arum also says its a war zone out there, absolute rubbish. We were there three days ago, it is spectacular and is ready for this event," Hearn said.

Arum also stated that Ruiz had Hearn "by the balls" in the rematch talks - which the British promoter laughed off.

"We've got a contract with Andy Ruiz and we have a rematch clause," stated Hearn.

"Bob Arum has totally lost the plot. All he wants is Andy Ruiz to waste his career and lose his belts because he's got [Kubrat] Pulev and he's next in line for the IBF mandatory. If he don't take this fight, Pulev gets the belt."

Hearn then dug a shot at Arum over his last two boxing shows and says the veteran promoter should be thankful that Matchroom is co-promoting the fight between Lomachenko and Hearn fighter Luke Campbell (20-2, 16 KO's), which takes place next Saturday at The O2. Hearn is expecting a sell-out in London.

"What Bob Arum needs to do is worry about his own shows. His last two shows, one in Los Angeles and one in Philadelphia, sold a cumulative amount of tickets of 800. In fact next week, I'm getting him right out of trouble selling 18,000 tickets for Lomachenko and Campbell in London. So Bob just needs to calm down. I know he's just trying to cause problems for Andy Ruiz but you know the fights on. He doesn't have us by the balls. We have a contract," Hearn said.

[QUOTE=Motorcity Cobra;20007575]****ty ratings and nobody coming to your shows. That's a problem no matter if ESPN is paying or not because they won't be paying for long with the results[/QUOTE] Now we're talking. TR isn't going to waste any time…

[QUOTE=El_Mero;20005745]Pbc doin the same thing. Not sure why that's news[/QUOTE] PBC isn't killing it either. Bathroom / Matchroom same crap is on life support

[QUOTE=DARTH SILKWORMS;20007541]None of it matters. ESPN is paying. Understand?[/QUOTE] You're still stuck on money. Hearn is not talking about money. He's talking about the lack of interest in their shows. His number is way off but he's using hyperbole. Their…

[QUOTE=Motorcity Cobra;20007138]He's talking about sales, not revenue generated. Nobody coming up see the fighters. It's not a price problem. It's a lack of interest problem. Understand?[/QUOTE] None of it matters. ESPN is paying. Understand?

Lol these promoters love the spotlight boy I tell ya.these love birds need to lace up the gloves themselves since they both are hungry for attention.i think hearn vs bob would sell out lol